Rath Yatra In Puri Today, But Without Devotees In A Historic First 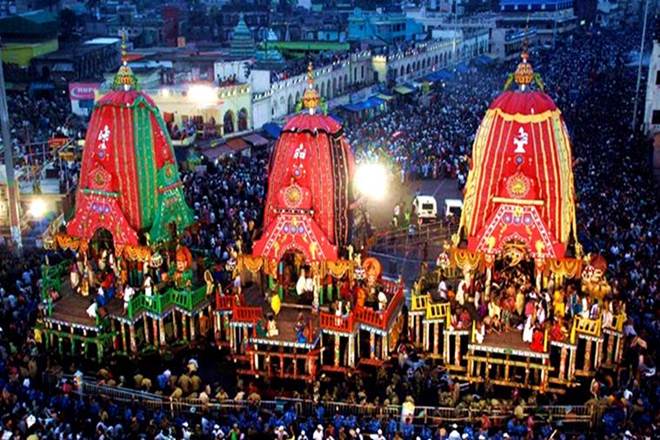 Puri Jagannath Yatra: In visuals, a huge crowd could be seen outside the iconic temple – decorated for the occasion – as they took part in the colourful procession and the priests took the idol of Lord Balabhadra to a chariot.

Puri’s famous Rath Yatra began this morning as a large number of priests and temple attendants gathered at the Jagannath Temple without devotees in a historic first, a day after the Supreme Court allowed Odisha to hold the seven-day chariot festival in a restricted fashion amid India’s fight against coronavirus.

In visuals, a huge crowd could be seen outside the iconic temple – decorated for the occasion – as they took part in the colourful procession and the priests took the idol of Lord Balabhadra to a chariot. The temple complex was sanitised before the rituals began.

A video tweeted by news agency ANI showed some sevayats (people who perform the ritual services) playing traditional musical instruments and dancing to the beats as others carried the idol to the chariot. In another video, a huge crowd surrounded a chariot after the idol was mounted on it.

#WATCH Odisha: Priests and ‘sevayats’ taking the idol of Lord Balabhadra to chariot for the #RathYatra from Jagannath Temple in Puri. pic.twitter.com/ohoWKlTwmm

In a tweet, Prime Minister Narendra Modi this morning greeted the devotees, saying: “My heartiest greetings to all of you on the auspicious occasion of Lord Jagannath’s Rath Yatra. I wish that this journey filled with devotion brings happiness, prosperity, good luck and health to the lives of the countrymen. Jai Jagannath!”

On Monday, the Supreme Court recalled its last week’s order, which banned the hugely popular festival this year, and said the state government will have to declare curfew whenever the chariots are pulled. No more than 500 people are allowed to pull the chariots as per the new order and social distancing has to be maintained.

Only those who have tested negative for coronavirus can take part in the processions. “As per the top court’s order, coronavirus test was conducted for all ‘sevayats’ (priests) at Puri’s Jagannath Temple. One sevayat has tested positive, he is not allowed to participate in the Rath Yatra,” Odisha Law Minister Pratap Jena was quoted as saying today by ANI.

“There shall be an interval of one hour between two chariots. Each of those engaged in pulling the chariot shall maintain social distancing before, during and after the Rath Yatra,” the court said as part of the detailed guidelines.

The Rath Yatra from the Jagannath temple – the biggest temple of the Lord Jagannath in the coastal district of Puri — is attended by lakhs of people from across the world. But in view of the highly contagious coronavirus outbreak, the court had last week ordered a ban on the festivals, saying: “Such gatherings can’t take place at the time of the pandemic.”

Soon after the top court’s initial comments on Monday, Chief Minister Naveen Patnaik tweeted saying: “Jai Jagannath”. This morning, he tweeted in Odia: “Heartiest greetings and congratulations on the occasion of the Holy Rath Yatra. On this occasion, I pray to the Lord for the happiness, prosperity and well-being of the people of the state.” In another post, he shared some pictures of the iconic temple.

Lord Jagannatha is regarded as the supreme god and the sovereign monarch of the Odishan empire. Puri Jagannath Temple Odisha is known as the land of Lord Jagannath, which literally means the Lord of the Universe.

During the celebrations, Lord Jagannath comes out of his sanctum sanctorum so that devotees from different sects and communities can see him. lt is said that those who take part in the festivity “earn their passage to the heaven”, according to the temple officials.