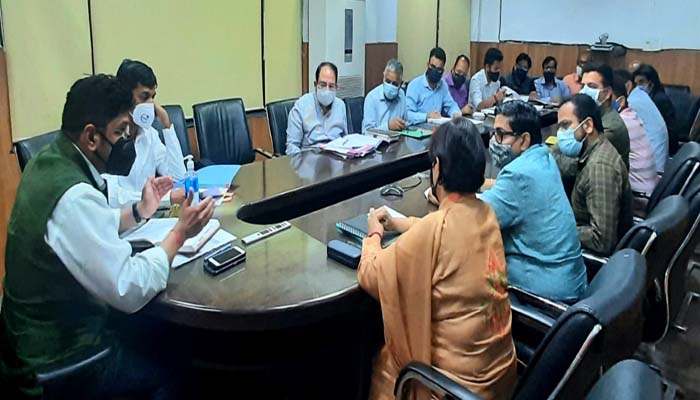 The NHAI officials briefed the Div Com about the present status of work on the prestigious road project and the future work plan. It was informed that work is in progress on different phases of the Project.

The meeting had a threadbare discussion on various issues hampering the work progress. The Div Com directed the Deputy Commissioners and SDMs to resolve all the issues and provide hindrance free land to the executing agencies for smooth execution of the work on the prestigious project.

It is pertinent to mention that the 58.25 KM, 4 lane Ring Road starts from Raya Morh of Jammu-Pathankot National Highway in Samba district and connect Jagti on the Jammu – Srinagar National Highway. The phase 1 of the project from Akhnoor Road to Kot Bhalwal has already been opened for traffic.

Meanwhile, the Div Com also reviewed the progress of land acquisition and disbursement of compensation.

The Div Com took a strong note of pending compensation and directed concerned officers to complete the disbursement. He sought 100 % disbursement of land compensation to the owners of acquired land in a time bound manner.

The Div Com also took stock of requirement and availability of construction material and directed the concerned officers to process short term permits to meet the shortage of aggregate minor minerals.

The Div Com directed the NHAI officers to expedite the pace of work and emphasized on early completion of the road construction work on Km. -0+687 to Km. 10+000 connecting Raya Morh, Sarore, Bishnah and Kunjwani so that it could be thrown open for traffic public at the earliest.

He further asked the concerned officers to engage more men and machinery to speed up the work progress. He also instructed them to formulate weekly, monthly work completion plans. He further directed the Deputy Commissioners to personally monitor the work progress.