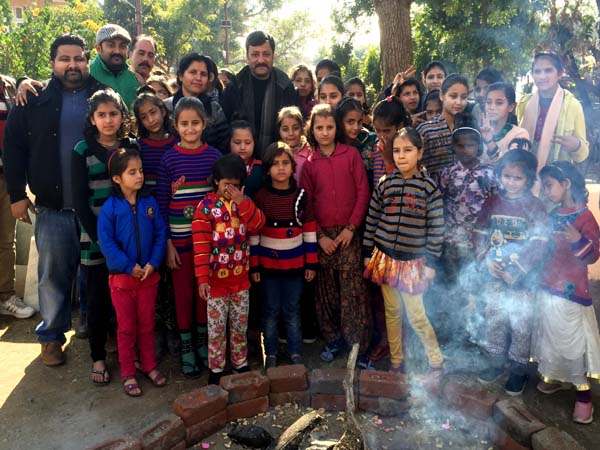 While celebrating Lohri amid singing of folk songs and dancing on the tunes of Punjabi folk with children, chairman Team Jammu, Zorawar Singh Jamwal, who was the chief guest on the occasion handed over a cheque of Rs 5,100 to the president, Bal Ved Ashram, Bal Krishan Gupta, for helping the needy children in their better education.

On the occasion, children presented colourful bonanza of cultural items. Sweets and fruits were also distributed to the gathering after celebrating Lohri amid chanting of Vedic Mantras.

In his brief address, Zorawar Singh Jamwal congratulated the budding children who bagged several prizes in both academics as well as in education, despite facing several hardships. He appealed to the entire civil society of Jammu to come forward and deliver their best for these needy children, who have capacity and capability to become the best and can take name of entire Jammu Province at new heights. 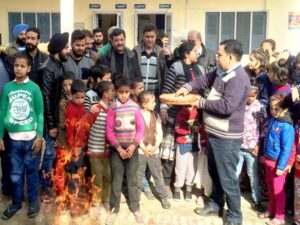 Looking at the merits of girl students who have bagged more than 90 percent in their academics, Chairman, Team Jammu, Zorawar Singh Jamwal also urged the political leaders belonging to different outfits but representing Jammu region to untidily move a resolution in Legislative Assembly for special allocation of funds for Bal Ved Ashram in the ongoing Budget Session. He appreciated the Committee of Bal Ashram, which is doing an outstanding and tireless while helping this lot of children who have been the victims of terrorism.

Earlier, Secretary, Bal Ved Ashram, Sudesh Pal, in his welcome address gave a detailed report of the working of Ashram. He congratulated the gathering for also observing the 100th year of the Ashram, the land of which was donated by the then Maharaja Pratap Singh.

Karandeep Singh Lucky, chairman, Child Care Society, presented vote of thanks and also celebrated his birthday today with the children of Ashram.