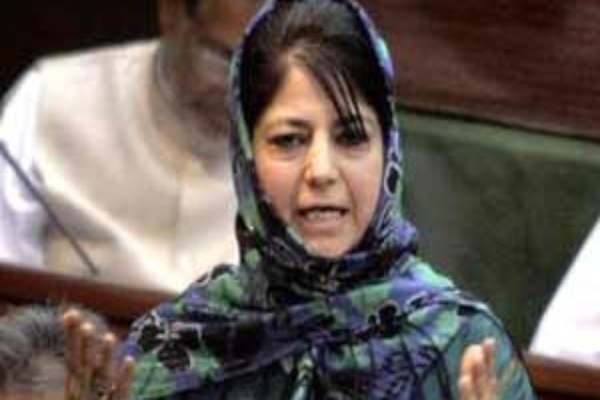 Jammu,   December 9 ( JKNT) “ Then let Delhi run the government here ( J&K),” these were the  words of Chef Minister  Mehbooba  Mufti before she staged an unprecedented walk out of the  cabinet meeting Friday evening.

The provocation was offered by Deputy Chief Minister  Nirmal Singh  and other BJP ministers, when they resisted her  proposal to make KPS cadre officers Deputy Inspector Generals   without fulfilling the  mandatory criterion of getting  inducted into the Indian Police Service ( IPS) .

To counter Chief Minister’s argument that  she had made a commitment to KPS cadre that she would get it done for them, the BJP ministers said in chorus  that “ it cannot happen.”

They claimed that they were under  instructions from their high command  and Delhi.  Deeply irritated by this audacity of the BJP ministers who used to be sheepish in the previous cabinet meeting , she declared,” then  let Delhi run the government” and walked out of the cabinet meeting.

She drove  straight to her official residence  to be followed by a team of BJP ministers who  placated her and  promised that a middle-ground  may be explored to defuse the situation.

It was decided that a cabinet subcommittee would be formed to look into the matter that the prestige of  both the sides as members of the government  is reflected in the near future.

This truce has calmed the tempers at the moment.