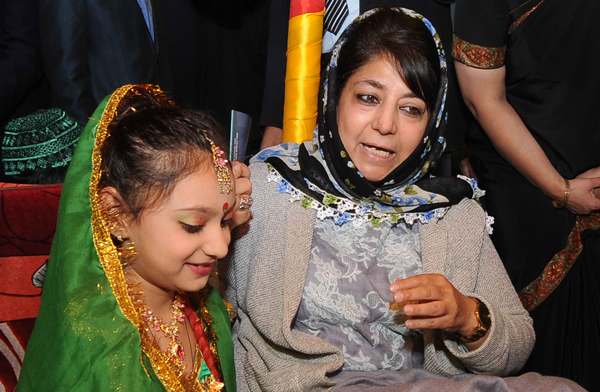 Chief Minister, Mehbooba Mufti today described tourism as an important means of people to people dialogue adding that it gives ample opportunities to people to know each other better and closely. She however, regretted the negative portrayal of the State by certain outside media outlets.

Addressing the delegates of India Tavel Mart (ITM) here this evening, the Chief Minister said there is no better mechanism to let the outsiders know of the State, its people and the situation on their own than the tourism sector. That is why, she said, every tourist visit to the State is a step towards peace.

Asking the Tourism Department and tour operators to work together for improving the tourist footfall to the State, the Chief Minister said, “The impression about the State would improve consequentially with more and more tourist arrivals as they would be judging the place for themselves rather than relying on newsroom discussions of some news channels”.

Mehbooba Mufti said that it is true that Jammu Kashmir is having certain political issues but the hospitable nature of its people was never given proper and appropriate coverage. She recalled how a boatman in Dal recently rescued a tourist family when his boat capsized and in the process got himself drowned and how some injured Amarnath Yatris were treated by local people during the last few difficult months. But these things were not reflected appropriately, she remarked with regret. She said some media channels unfortunately created gory pictures on both the sides and tourism is the best way to bridge this gap.

Terming the vision of late Mufti Muhammad Sayeed about Jammu & Kashmir as the cornerstone of her Government, the Chief Minister said the late leader believed that peace was imperative for development of the State and for that dialogue and discourse was a must. She said the aim of the late leader was to bring closer hearts and minds of people of the three regions of the state when he thought of making the Government in 2014. His aim was to unite people and regions and not divide them, she said.

Mehbooba Mufti said one of the positive things to come out of recent disturbed situation in the State was that people of all the regions now feel the pain of each other. Many businessmen of Jammu suffered losses due to shut down in Kashmir and many of Kashmiri parents thought it safe to send their wards to Jammu when they couldn’t send them to school there, she said adding that something of this sort is being witnessed in Jammu & Kashmir for the first time and complimented the common people for showing such gestures.

Giving some food for thought to the delegates, the Chief Minister asked them to sit down and see how Jammu & Kashmir can be marketed in tourism industry for every section of society. Why can’t we have some separate packages for adventure seekers, pilgrimage seekers, women and girls as J&K has remained safest on women’s security count.

Mehbooba Mufti said tourist infrastructure needs more and more upgradation and it needs to be made Nature friendly while providing the guests all the requisite facilities. She said the Centre has allocated sufficient funds for tourism development in the State and hoped that in the coming months and years tourist infrastructure would be upgraded exponentially.

On the occasion, the Chief Minister distributed 4th All India Tour and Travel awards among the winners.

Earlier, top industry leaders of the country including  Subhash Goel,  P P Khanna and  Akshay Kumar also addressed the gathering and assured the State Government of their support in promoting tourism. They also hailed the vision and plan of late Mufti Mohammad Sayeed for promoting tourism in the State.