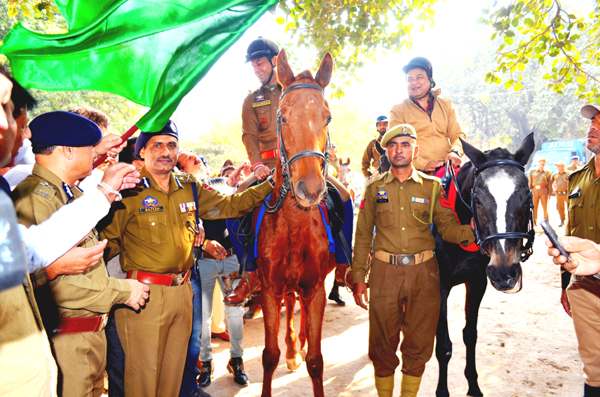 In first of its kind in Jammu and Kashmir the Udhampur Police today launched the Mounted Police Squad to control crime and maintenance of law and order in busy markets and by-lanes.

Rajesh Kumar Yadav, Director, Sher-i-Kashmir Police Academy Udhampur was chief guest on the occasion, who flagged off the first ever Mounted squad of District Police Udhampur in the presence of  Surinder Gupta,, Inspector General of Police,  Neeraj Kumar, Deputy  Commissioner, Udhampur and other prominent citizens and dignitaries of district Udhampur.

Udhampur police is initially going to deploy Mounted Police Squads in Udhampur town and if it proved successful it would be implemented in other busy towns, hilly areas and the areas where the vehicular movement is not practically possible.

Unlike the traditional policing practices, Mounted Police Squad of Udhampur Police will perform its crime and la and order duties, mounted on horses well dressed in riding uniforms and equipped with law and order equipments,wireless sets,pistols and handy Public Address systems as per requirement.

Because of their mobile mass and height advantage, Mounted Police is increasingly used in UK for crime prevention and high visibility policing roles like crowd control. The added height and visibility that the horses give their riders not only allow officers to observe a wider area, but it also allows people in the wider area to see the officers, which acts as a deterrence on the trouble makers besides help people to easily locate Mounted Police officers, when they need them.

It is commonly said that a mounted police officer is equal to ten or more officers on foot during L&O situations.

In future, similar Mounted police squads would be deployed for specialized duties ranging from mela duties, free style wrestling events, patrol of parks and wilderness, where deploying police cars would be impractical or noisy, on riot control duty, where the horse serves to intimidate those whom it is desired to disperse through its larger size, or may be sent in to detain trouble makers or offenders from the crowd.

Besides this, a ticketing system to check and control wrong parking was also launched by Udhampur Police which is going to be made operational  effective 25th November wherein the people doing wrong parking would be warned by announcements twice, through handy PA Systems issued to these Horse riders besides other police patrol teams, to take away their wrongly parked vehicles, followed by pasting a ticket designed by district police on their vehicle to face legal action accordingly.

Jammu to host first ever All India Mushaira, Kavi Sammelan