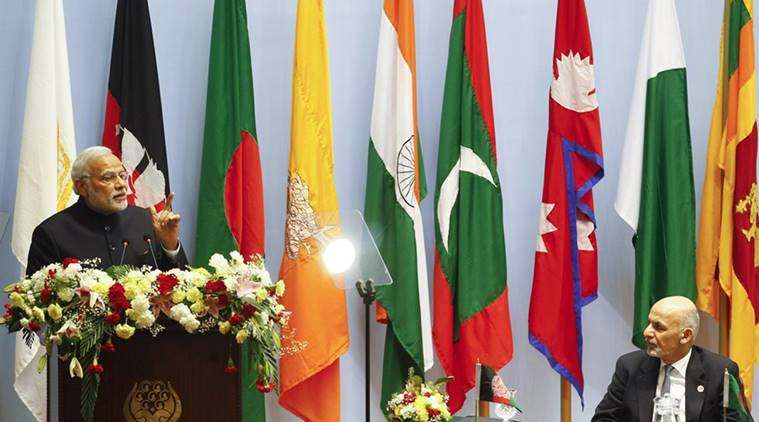 India’s decision to pull out of the regional grouping, South Asian Association  of Regional Cooperation ( SAARC) has had a spiraling effect with four more nations announcing the withdrawal  forcing Pakistan to “ postpone” the 19th summit  which was scheduled to be held in  Islamabad  , Pakistan in November .

Pakistan not hosting the summit  is a bad news for the  SAARC. But, for that Pakistan needs to do a little bit of self-introspection . Why countries, not only in the SAARC, but also  the rest  of the world  are not  siding with it . It is not that Pakistan has become  a pariah state all of sudden, but its  investment in the growing universities of jihad , and export of jihadis from there to other parts of the world, particularly India and Afghanistan, to achieve its  political and diplomatic objectives.

Had  Pakistan not sponsored the September 18th attack at an army base in Uri in Kashmir  in which 19 Indian soldiers were killed, the SAARC summit would have  stayed its course. As  the Indian envoy in Pakistan had  declared, “ Prime Minister Narendra Modi was  keen to visit Pakistan for the SAARC summit.”  But Pakistan’s reliance on terrorists to achieve its diplomatic targets in the misplaced campaign of  highlighting “ Kashmir issue” internationally and  introducing  the “ fresh spate of Indian atrocities on Kashmiris fighting for their  right to self determination ,” undid  it .

Instead of discussing terrorism as a major menace  in the region  with India, its insistence to shield terrorists from the eyes of the world , has cist it heavily. As the roadmap was drawn in Ufa, Russia in July last year, the discussions on terrorism  were to be followed  by  talks on Kashmir . But by bringing in  factors like “ consultations with separatists”, Pakistan  used that as an excuse to call off the talks.

Now, when the SAARC summit has been postponed, Pakistan would do it better  to itself if  it tries to get back to the  world  where terrorism is  seen as major  threat to the global peace . Its  repeated threats of using the nuclear weapons in the region  have made the world wary about it and its intentions .

SAARC might not have the ideal regional grouping ,  but  the way it has  collapsed this time as far as hosting it Islamabad is concerned,  is  full of symbolism  of Pakistan’s isolation .

There  still is a way out for it, Pakistan should dismantle   infrastructure of terrorism , and all its diplomatic isolation would start going into retreat. It is not a long shot, but the  current threats  from Pakistan’s leadership don’t indicate that  Pakistan is on course-correction . Uri attack has cost it heavily  in the diplomatic world, but it is still seized by  frozen mindset where it thinks that  jihadis can  draw salvation for it.  Bad and sad.