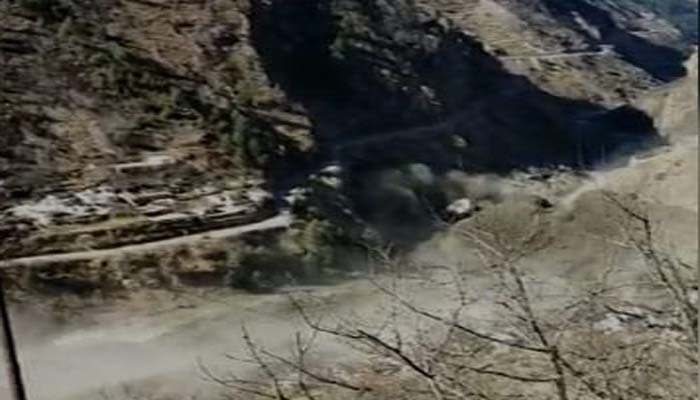 A glacial burst in Uttarakhand’s Chamoli district triggered an avalanche and massive flooding along the Alaknanda and Dhauliganga rivers on Sunday morning, forcing the emergency evacuation of thousands from surrounding areas, and damaging houses and the nearby Rishiganga power project.

Around 100 to 150 people may have been killed in the flash flood, Uttarakhand Chief Secretary Om Prakash.

Five NDRF (National Disaster Response Force) teams – one from Dehradun and four from Delhi, as well as two from the ITBP (Indo-Tibetan Border Police) have been deployed for search-and-rescue operations, with authorities fearing hundreds may still be stuck.

Over 150 labourers working at the Rishiganga power project, which was hit by floods, are missing, SDRF DIG Ridhim Aggarwal told.

“Representatives of the power project have told me that they are not being able to contact around 150 of their workmen at the project site,” she said.

Authorities also fear for the safety of labourers employed at ongoing road and rail projects in the area.

An alert has been sounded for all downstream districts, and people from Vishnuprayag, Joshimath, Karnprayag, Rudraprayag, Rishikesh and Haridwar have been warned against visiting river banks.

Prime Minister Narendra Modi, who is in Assam to campaign for Assembly elections, has said he is reviewing the situation and has spoken to Chief Minister Trivendra Singh Rawat and other top officials.

“Am constantly monitoring the unfortunate situation in Uttarakhand. India stands with Uttarakhand and the nation prays for everyone’s safety there. Have been continuously speaking to senior authorities and getting updates on NDRF deployment, rescue work and relief operations,” the Prime Minister tweeted.

Home Minister Amit Shah also tweeted and said he too had spoken to Chief Minister Rawat.

“In relation to the natural disaster in Uttarakhand, Chief Minister TS Rawat and I have spoken to the Director-Generals of the ITBP and NDRF. All concerned officers and organisations are working on a war footing to ensure people are safe. NDRF teams have left for rescue ops and all possible help will be provided,” Mr Shah tweeted.

Rawat has asked people not to panic or spread rumours, and stressed that district administration, the police and disaster response teams were dealing with the situation.

“Do not pay attention to any kind of rumors. The government is taking all necessary steps,” Mr Rawat tweeted Sunday morning, adding that he was on his to survey affected regions.

“If you are stuck in the affected area, if you need any kind of help, please contact Disaster Operations Center number 1070 or 9557444486. Please do not spread rumors from old videos about the incident,” Mr Rawat tweeted.