Violent mobs set ablaze truck from U P in Kashmir 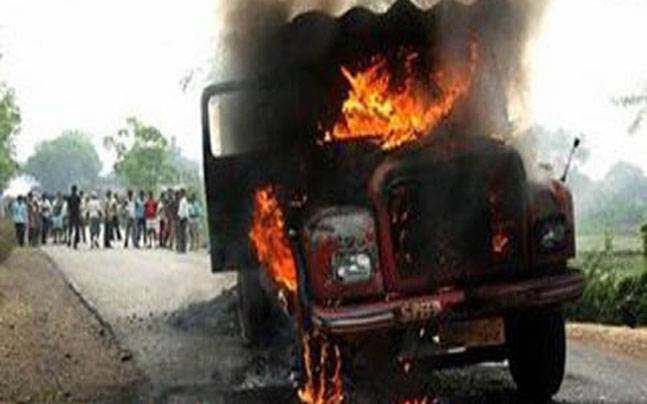 In the early Sunday  morning rioting on  Srinagar- Jammu highway ,   violent mobs  set ablaze a truck of  Uttar Pradesh  at Khudwani  in Kulgam district and  pelted stones damaging a number of vehicles , forcing the authorities to impose curfew in the area.

The district administration has  called in the army to control the situation . The situation is reported to be highly tense.

Reports  reaching here said that the villagers, enraged by the  night-raid of the police and CRPF in which certain chronic stone pelters and rioters were arrested, took to the highway and stoned and torched everything that came their way. A parked truck was set ablaze and the driver ran for his life. The whereabouts of the truck driver and conductor are not known.

Police denied the allegations of the locals that  during the raid any  excesses took place.

The police’s  raids were to  arrest the stone pelters and instigators who have kept the life paralyzed in Kashmir. The clashes between the mobs and the security forces for the past three months have left more than 80 people dead and  hundreds others injured.

The clashes had started after the violent protests erupted following the killing of a militant commander in Kokkernag area of South Kashmir on July 8, but later these protests were fuelled by the vested interests  and Pakistan in full measure to bring Kashmir in the international spotlight.