Virushka reception: Kangana Ranaut and Karan Johar at the venue at the same time – Know what happened next 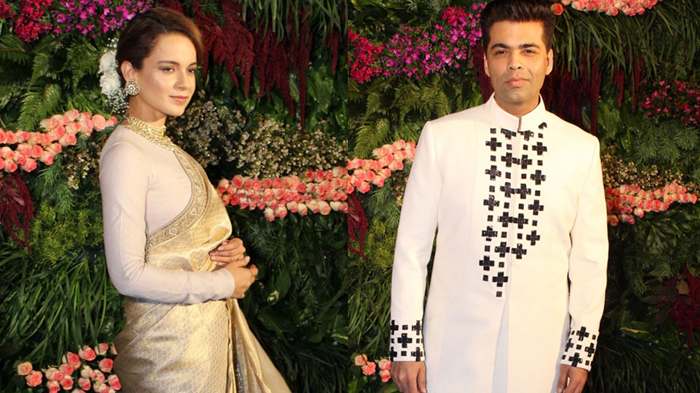 Mumbai: Virat Kohli and Anushka Sharma’s wedding reception in the city’s St Regis Astor Ballroom was a star-studded event. The who’s who from the world of business, entertainment and cricket had graced the occasion to wish the newlyweds. And among the high-profile invitees were Kangana Ranaut and Karan Johar too!

We all know Kangana and Karan don’t share a great history. The former had accused the latter of nepotism on his show Koffee With Karan in February this year while she was promoting her film Rangoon along with Saif Ali Khan.

The nepotism debate soon became a nation discourse of sought. There were allegations and counter-allegations made by both the parties and bad blood between them was clearly visible.

So what really happened when the two exchanged glances at Virushka’s reception? Did they look through each other? Or did they completely avoid one another?

According to a report in India.com, Kangana and Karan smiled at each other! Surprised? Well, it’s true.

“It was nothing less than an epic moment. Kangana Ranaut, who has arrived just moments before Karan Johar, was happily posing with yesteryear divas Rekha and Madhuri Dixit Nene. It is then when Rekha spotted Karan and waved out to him. Just then, Kangs and KJo exchanged more than just a glance. They smiled at each other and Kangana took an exit after exchanging a few hugs with Rekha and Madhuri,” the source said.

“There was nothing awkward about what happened. Kangana and Karan seemed totally unaffected by each other’s presence just few steps away from each other,” the source added.

Well, it sounds really great. After all, they both are matured individuals and it’s a fabulous idea to let bygones be bygones. No?