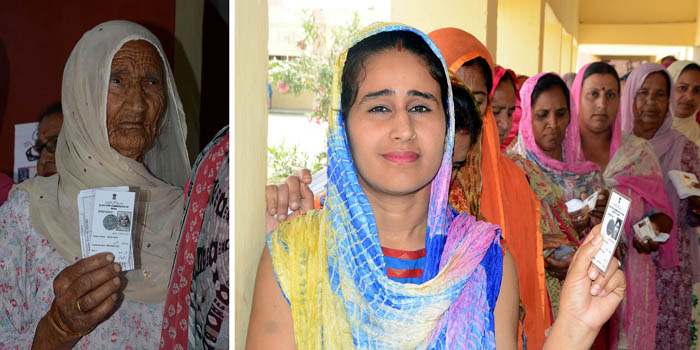 The morning today couldn’t have been more enthusing and provoking to vote. The early morning breeze coupled with a relaxing dip in the day temperature set the tone for celebrating the festival of democracy today.

As the polling started at 7 am in the morning, long queues of voters were witnessed eager to cast their votes. At many places, excitement among youth, particularly first time voters like Tanishi and Nisha at polling stations Mawakarora & Dhanger was visible who wanted to shape up their dreams by choosing candidates of their choices.

At many a place, women outnumbered men to exercise their franchise, thus amply displaying the deep roots democracy has taken among masses. Age or physical health couldn’t deter voters from exercising their choice. Baba Gyan Singh, 102 year old cast his vote at PS Mawakarora (Akhnoor) and so did Bansi Lal, 85 year old in Khour constituency.

At many rural areas, many voters in their traditional attires had come to the polling booths to cast their votes.

The scene wasn’t different across Baramulla Parliamentary Constituency. The season coincidentally marks the beginning of spring with mesmerising almond bloom all around the Valley.

Here too people were seen waiting in long queues at Ladoora, Sangrama, Wussan, Naidkhai, Malpora, Malangam,  Matipora and other places for their turn to exercise their franchise. Enthusiastic voters thronged Government Middle School K P Payeen, Pattan and the first time voters were seen lined up at the polling booths brewing with enthusiasm.

The voters expressed satisfaction for the facilities made available at the polling booths for the smooth conduct of polls.

Democracy, as they say, is a government by debate and discussion and today’s enthusiasm amply reflected that.