Well-planned conspiracy to destablise Kashmir at roots of unrest : Mehbooba 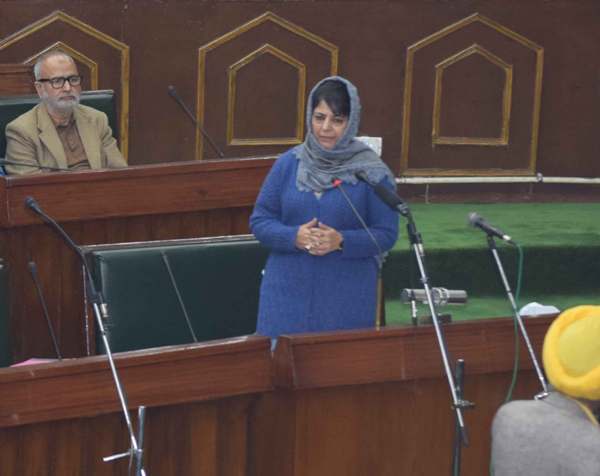 Jammu,  January 9  (JKNT)Chief Minister Mehbooba Mufti  today  thundered in the Legislative Assembly and held Pakistan and separatists squarely responsible for  the  turbulence in Kashmir under a “ well-planned conspiracy”, while tearing apart the opposition charge that her government failed  the past six months.

In her counter-offensive   to a special discussion on the Kashmir unrest that as triggered following the killing of  Hizb-ul-Mujahaden commander Burhan Wani in July last year  in the Assembly , Mehbooba Mufti  exposed all the contours of the “ well-planned conspiracy” by Pakistan and separatists in tandem against the people of Kashmir. First it was the  chorus of the unfounded charge that “ a sainik colony”  was  coming up alongside the opposition to the transition camps for migrant Kashmiri Pandits. And when all this failed, the  death of the militant leader was used aas a spark to cause the unrest.

In a mix of emotion and anger , she said that the pregnant women had to bare their bellies  and  young boys went for examinations  with their mothers carrying  doctors’ prescription. There were vested interests  behind the trouble.

“ They used young boys as shields while attacking the  army and police camps , and they expected  security forces to  exercise  restraint .”

to the leaders from the countries. The doors

to dialogue were shut  by them.

Mehbooba said that the things were perfect when those were disturbed for weeks together by the anti-peace  elements.