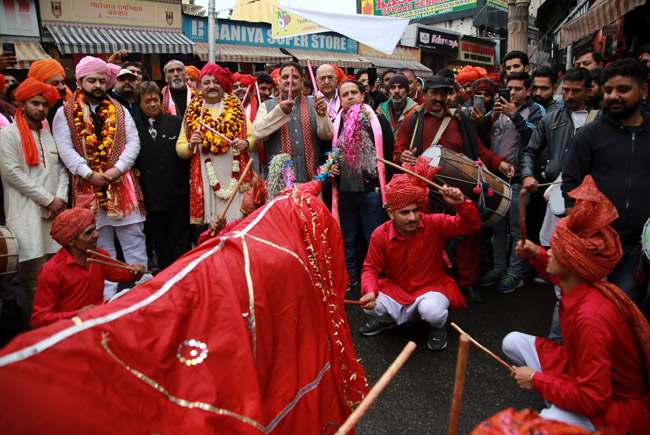 As Jammu region is facing cultural aggression due to anti-Dogra policies being propagated by ruling class since 1947, Team Jammu along with other organizations have taken this initiative with the involvement of youth, elderly and prominent people and representatives from all sections of the society.

The Lohri procession that witnessed hundreds of youth, children and elderly, started from historical Mubarak Mandi complex-seat of erstwhile Dogra rulers and culminated at the world famous Shri Raghunath Temple before passing through different routes of the city including Chowk Chabutra, Jain Bazar, Link Road, Purani Mandi, Center Basic School Road, Old Hospital Road. Super Bazaar Market, City Chowk, Kanak Mandi and Rajinder Bazar. The Dogra attire worn by the participants reminded the elders of Maharaja’s days when such dresses were wore by one and all.

Route of the procession was especially decorated with buntings, flowers and banners. Various shopkeeper associations, from Mubarak Mandi to Raghunath Bazar had set up stalls of water, juice, fruits and dry fruits to welcome the participants who were beating dhols and singing traditional Dogri songs. People welcomed the procession including Nat Manch artists and school children or Environmental Education Institute, Jain Bazar performing Dhandiya at several places by showering flower petals.

The historical event was organized to revive the old tradition when erstwhile Dogra rulers used to celebrate Lohri in similar way by taking out a procession from Mubarak Mandi. Memory of Maharaja Hari Singh’s time was refreshed in the mind of elderly people of the walled city when Lohri procession passed through their localities.

While culminating the procession outside world famous Shri Raghunath ji Temple by lighting firewood and jointly performing ‘Argg’ with recitation of ‘Gayatri Mantra” by one and all, the speakers including, Chairman of Team Jammu, Zorawar Singh Jamwal, President, Jammu Heritage Society, Bhuvneshwar Gandtora , Chairman, Jammu Dogra Warriors, Varun Magotra and cultural wing head of Team Jammu and noted Dogri poet, Thakura Randheer Singh Raipuria, stated that culture and ethos of Dogras were under threat due to cultural aggression by the successive democratic elected government of State after 1947. “We are facing identity crisis. It is high time for Dogra to wake up otherwise Dogra culture and ethos would be a history”, they warned and added that aim of today’s event is to educate younger generation about our cultural festivals like Lohri.

While interacting with youth, chairman Team Jammu, Zorawar Singh Jamwal especially appealed to the people to encourage their wards in speaking mother tongue Dogri language and also educate them about the Dogra history and its contribution towards developing erstwhile J&K state that once had its territory upto Gilgit, Baltistan, Balochistan as well as upto Tibet.

Zorawar Singh also thanked Randhir Raipuria and retd DySP Kamal Sharma and their groups for making colossal and traditional ‘Chajjaas’ that marked the special feature of the procession and was also widely liked by the people.

Folk group dancers including Dhani Ram from Dansal and Raj Kumar from Bajalta exhibited spell bound performances that earned applauses from city residents and even tourists from Kashmir valley and other states of the country. all gave their best of golf culture and very impressive ‘CHAJJAS’ were made of different sizes depicting culture and tourist sites of Jammu.

Convenor of Vishav Kashmiri Samaj and former Commissioner, JMC, Kiran Wattal along with number of KP youths and elderly also participated in the event and wished people on the eve of Lohri.