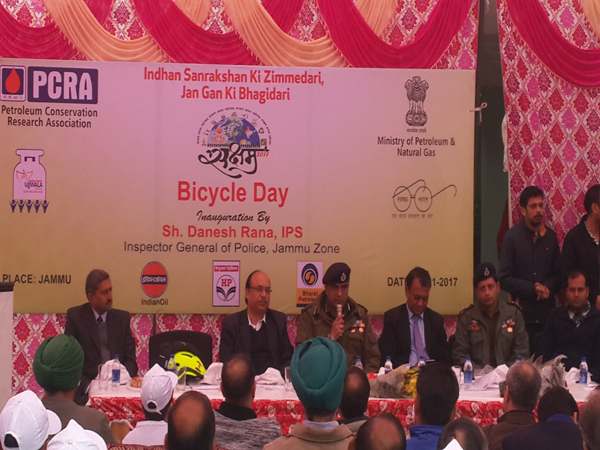 As part of the activities entrusted to Oil Marketing Companies, ‘Bi-cycle Day’ is being organized across the country on 21.01.2017. The Bi-cycle rally was organized by Hindustan Petroleum Corporation Limited in Jammu with support of other OMCs. The rally was flagged off by Chief Guest for the occasion Shri Danesh Rana, IGP, Jammu start from HPCL Office / Housing Complex at Gandhinagar and ended at HPCL Petrol Pump M/s Jay Kay Gas, Opposite Aisa Hotel

The event commenced with a simple ceremony whereby participants were distributed caps and T Shirts with the conservation messages. Shri Danesh Rana, the chief guest for the occasion, administered the conservation pledge to all the members in the gathering. In his address, he stressed the importance

of the theme of the event and its implications on the national future and prosperity.

NukkadNataks on the theme of ‘Conservation of Petroleum Products’ were also organized for the gathering.

message of the need to conserve the planet’s non renewable energy sources.