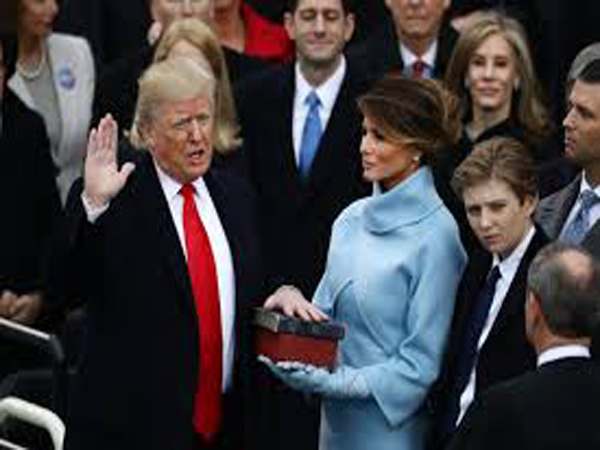 Washington  D C. , January 20   ( JKNT)  Donald Trump was sworn in as  45th President of the United  States of America  on Friday in a glittering ceremony attended  among others by former presidents, international leaders  hundreds of thousands of  enthusiastic   spectators.

Trump was administered oath by Chief Justice  of Supreme Court Justice John Roberts amid mild drizzle which forced many in the audience to come up with their  rain-protecting gear .

In his inaugural address,  Trump emphasized his campaign theme “ America first” and  virtually lashed out at all his  predecessors for having  undermined the  American economy and economy . “ Now the transfer of power would be from Washington D C to all over,” he said  to the loud cheers in response by the audience that reflected the country’s mood against unemployment and huge sums of money spent on the wars in other countries.

Trump  arrived  at the Capitol  with hand-in hand  with his  wife  Melania Trump . He took the oath  and  waved to the surging cr0wds in the  grandstands   acknowledging their greetings  at his inauguration ceremony .

A band played classical tunes ahead of his arrival at the U S  Capitol .

Trump  and Melania attended a service at St. John’s Episcopal Church near the White House, continuing an inauguration-day tradition. One of the preachers was expected to be Robert Jeffress, a Southern Baptist minister who is pastor of a Dallas megachurch, and who has made inflammatory condemnations of both Mormonism and Islam in the past.

Jeffress, who grew close to Trump during the 2016 presidential campaign, said on Twitter that his sermon would be entitled “When God Chooses a Leader.” Trump left the service about 9:30 a.m. He mouthed “Thank you” to supporters as he climbed into an SUV.

Former Secretary of state  and Trump’s Democratic rival during the run up to Presidential election , Hillary Clinton arrived at the ceremony with her husband and former President  Bill Clinton .  She tweeted “ I am here for the American democracy.”