Education outreach to get fresh impetus 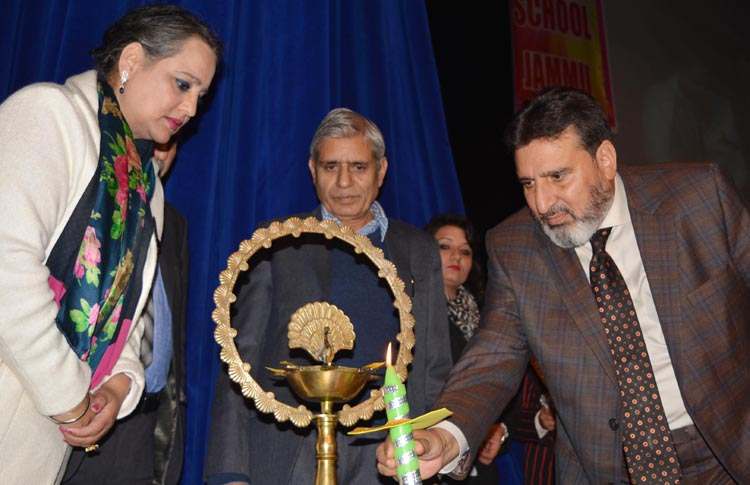 16 new GDCs to established, 400 schools to be upgraded in JK: Altaf Bukhari

Education outreach in Jammu and Kashmir is getting a fresh boost as the state Government has decided to upgrade 400 schools and establish sixteen new Degree Colleges to fill the accessibility gap.

“Two hundred High Schools would be Upgraded to Higher Secondary level, while 200 Middle schools would be upgraded to High School Level to fill the accessibility gap in the areas where students have to walk dozens of KMs to attend the classes” said Minister for education Syed Mohammad Altaf Bukhari here at annual Day Function of Doon International a Private School, as the chief Guest.

The Minister also informed that the Government is in the process of announcing sixteen new Degree Colleges for the deserving areas. He said there many important Tehsils which are still lacking the facility of higher education and they are being provided this facility soon.

World renowned tourist destination Pahalgam in Kashmir and Border Tehsil of RS Pura and many other areas greatly deserve Degree Colleges and Government has decided to meet the demand of people of such towns, Altaf Bukhari announced.

Regretting the setback to education sector in past decades, the Minister gave full credit to the teaching fraternity for remaining committed to the cause of education in the times of turbulence. “Teachers both in Government and Private sector deserve all praise for their commitment towards their noble profession and the state is indebted to them” he said adding that the present Government led by Chief Minister is committed to take education sector to new highs.

“No one can dispute the fact that the young generation of technocrats and officers serving the state at present are the lot which were educated by the teachers in the times of turbulence” he asserted and said both public   and private sector institutions are contributing to raise the education standard in their own ways.

The Minister also advised the Private School association to follow the norms in the appointment of teachers, payment of salary and other incentives to achieve quality of education.

Nizam-u-Din Bhat also hailed the contribution of teachers in steering the state out of the difficult times and remaining committed to their profession.

Highlighting the role of the teachers, Bhat said they are real nation builders and the society has great expectation from them.

“Development of state is possible only through education and    committed teachers are indispensible to achieve a well-educated society” he asserted and reiterated the commitment of government towards education sector.

In his address, Secretary School Education, Farooq Ahmed Shah listed series of reforms introduced in the department to increase enrollment and create congenial teaching learning atmosphere in the schools. He called upon the teachers to be best guides, engage and own the students as their own children.

Teachers are the backbone of the education system and only a committed educator can steer the students to the highest of success.