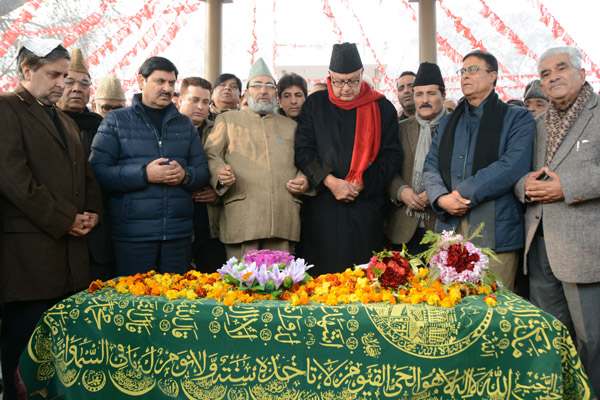 National Conference president Farooq Abdullah’s pledge to follow the Hurriyat Conference  and its united leadership ‘s pursuit for the rights of the people of Kashmir as a nation  received huge cheers from the audience  indicated   direction of  Kashmir mood.

“ We were, are and will be with them ( Hurriyat) in the current struggle  which they are pursuing,” he said at the 111th birth anniversary of his father and  founder of National Conference Sheikh Mohammad Abdullah , and adding it  in equally clear  manner that , “ let me tell you all that no struggle for azadi  is  easy. It is very, very difficult. We have already sacrificed many lives and still are offering and we  should not abandon our struggle  midway.”

In his typical style, he  referred to the two events in the Jammu and Kashmir’s history to advance the claim for azadi besides denying that Sheikh Abdullah was part of the accession of the state to India. “ It was Maharaja Hari Singh who had signed the instrument of accession  with India, not my father. It is wrong to say that my father had pushed for the accession of the state to India. It was purely the Maharaja’s decision.” Since neither Sheikh Abdullah nor National Conference is responsible for the accession , the National Conference cannot be faulted for not  holding of plebiscite. He, however, mentioned that under the provisions of the  plebiscite, that side ( Pakistan) was to recall its forces from the  state’s territory under their control and India  were to remove it from its part . Since these conditions  were not met , the plebiscite  could not be held. Where is the fault of National Conference,” he asked.

Farooq Abdullah referred to the 1931 stir against  Maharaja’s rule when the forces had shot some Kashmiris . Putting an emotional  element into that, Farooq recalled one Afreen Shah  having told his father that he had done his job and  now it rests on his shoulders to carry forward the struggle . Then, he jumped to 1947 invasion by tribals , and declared that “ had that invasion not taken place, Jammu, Kashmir and Ladakh would have been free. Maharaja wanted to  keep the state independent.”

“The current unrest and its flames will not be doused by any repression. That kind of suppression will only fuel the flames and help those leap high,” he cautioned the government. He assured the Hurriyat, “ All of us are with you  and your struggle as long as it remains just and focused on a fair goal of azadi.”