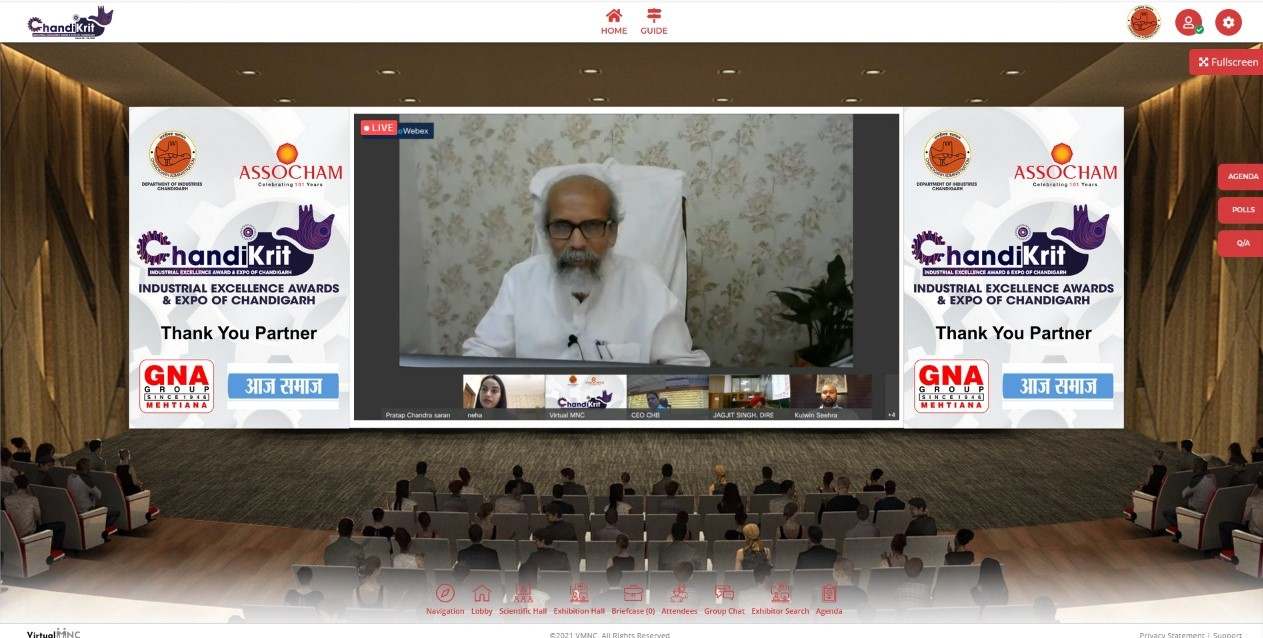 Chandigarh has the true potential to play a key role in building growth momentum of the North India. With an aim to chart a holistic growth trajectory for industries in the UT, Chandigarh ASSOCHAM in partnership with Dept of Industries, Chandigarh kick-started a five day program “

The event was started with the welcome note of Shri Kulwin Seehra, Chairman, ASSOCHAM Regional Committee on MSME, in which Ms Piyoosha Sharma from Ceyone Consultants Llp won the Chandikrit Women Entrepreneur of the Year while Ms Priya from Biomedical Healthcare won for Chandikrit Start-up of the Year.

Speaking at the program, Chief Guest of the program Shri Pratap Chandra Sarangi, Hon’ble Minister of State, Ministry of MSME emphasized on PM Modi clarion call for Aatamnirbhar Bharat, he said every village should be Aatamnirbhar but due to lack of awareness among industrialists they do not register in MSME’s.

“Honorable Prime Minister of India has set a target for Indian economy to reach USD 5 trillion benchmark by the year 2024-25. India has potential to become an established economic power, and in doing so MSMEs would play a vital role in expansion throughout the country,” he said.

Yashpal Garg, IAS, Secretary, Industries, Chandigarh Administration highlighted that such Industrial expos not only provide platform for the industries to showcase their products but also provide small industries an opportunity to learn the new technologies in their respective field and share ideas with government officials and other industrialists.

Industry may avail facility of accommodation to migrant/Industrial workers under Affordable Rental Housing Scheme which provide two room flat at Maloya on monthly rent of Rs.3000/-.

He further added, Bakery Products have been identified under ‘One District One Product (ODOP)’ scheme of Govt. of India.  Facility of Training and Credit Linked Subsidy may be availed by MSME units of this sector.

Jagjit Singh, Director, Industries, Chandigarh Administration shared that Chandikrit is an industrial fair that is organized annually by Industries Department UT Chandigarh with an aim to provide a unique platform to hundreds of Micro Medium and Small Scale Entrepreneurs for exhibiting and marketing their products.

The Industries department Chandigarh is committed to the vision of Aatamnirbhar Bharat given by our Hon’ble Prime Minister by encouraging local talent to develop their own business and contribute to the development of the nation, he added. Export Promotion Strategy is being prepared in consultation with DGFT. Startup policy and Logistics policy for Chandigarh are also under process and will be unveiled shortly.

Shri Seehra, in his address said that schemes related to credit, infrastructure building, skill development are designed to encourage MSMEs. Also, Government e-Marketplace launched by Government of India has encouraged MSMEs a lot.

He also, appreciated the steps taken by the Administration to ease the restrictions imposed due to land availability.

The initiative received an overwhelming response from the industry and stake holders with healthy participation. The interaction was greatly supported by the presence of the Govt. officials and industry leaders of Chandigarh.