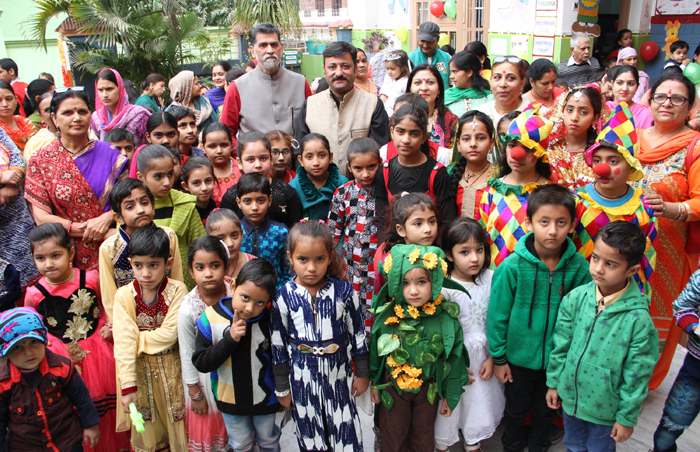 Rich tributes were paid to the first Prime Minister of India, Pt. Jawaharlal Nehru in beginning which was followed by serious of folk performances with taste and flavour of rich heritage of Jammu Kashmir and Ladakh. Food Stalls, Fun Games, Parent Activity and Treasure hunt were the main attraction of Bal Mela, which was attended and enjoyed by each and every parent with their wards. Various eating stalls were also organized in the school premises which added more fun in the event.

Zorawar Singh Jamwal focused on tiny tots and middle standard students and guided them how to be a good citizen of the state as well as of the country. He said that imparting moral values to children is equally important like imparting basic studies. “In today’s era of high competition, we are depriving our future from imparting them moral values, knowledge about our heritage and culture and are focusing more on merits and percentages during annual examinations. And such a trend is taking our children towards immense pressure, which finally creates a negative impact on young students. Instead, we must first see the likings and priorities of our wards/students and then decide how to go ahead with their schoolings,” said Zorawar Singh Jamwal and added, “if any student is sports loving, he/she must be encouraged in sports field viz.a.viz standard education, similarly if any child is has interest music and fine arts, parents and teachers must collectively work out and encourage the students so that they return finally with laurels, fame and name.”

While appreciating the self confidence and fantastic performances of school students during their respective events, Zorawar Singh Jamwal congratulated the School management and faculty for inculcating high spirit of patriotism and nationalism among the tiny tots.

Director of Navdeep Public School, Sangeeta Pathania in her address, informed the gathering that the main motto of organising BAL-MELA -2016 was to uplift the hidden calibre of children, teacher and parents and to create healthy atmosphere with their parents.