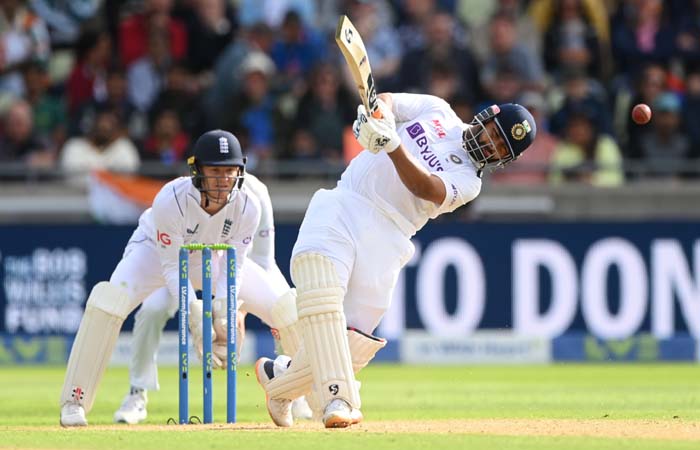 Star Indian pacer Jasprit Bumrah on Saturday smashed the most number of runs in an over in a Test cricket match.

Bumrah achieved this record during the fifth and final Test against England at Edgbaston in Birmingham.

With this, he has surpassed legendary West Indies batter Brian Lara, who hit South Africa’s Robin Peterson for 28 in an over in 2003. Following Lara are former Australian batter George Bailey, who hit England pacer James Anderson for 28 in 2013 and South African spinner Keshav Maharaj, who torched England’s Joe Root for 28 runs in 2020.

Coming to the match, India started off things on day 2 at 338/7. They were bundled out for 416 in 84.5 overs. Rishabh Pant (146) and Ravindra Jadeja (104) were the stars of India with the bat. Captain Jasprit Bumrah also contributed 31* in just 16 balls consisting of four boundaries and two sixes.

James Anderson was the star for England, taking 5/60 in 21.5 overs. Pacer Matty Potts also took 2/105 in 20 overs. Ben Stokes, Joe Root and Stuart Broad got a wicket each.

Earlier, a brilliant century from wicketkeeper-batter Rishabh Pant and his 222-run stand with Ravindra Jadeja powered India to 338/7 on the first day of the fifth and final Test against England at Edgbaston Stadium here on Friday.

India resumed their innings at 174/5 after Tea. Rishabh Pant showed his attacking intent by smashing pacer Matty Potts for two brilliant fours in the very first over after Tea.

He brought up his fifth Test hundred off just 89 balls. This was the third fastest hundred by an Indian outside Asia, with Virender Sehwag hitting the fastest in 78 balls against West Indies in 2006, followed by Mohammed Azharuddin against England in 1990 in 88 balls.

Pant went ballistic in the 61st over bowled by spinner Leach, smashing him for 4,6,4,6.

Jadeja also continued looking good with the bat and brought up his half-century. The pair also brought up their 200-run stand in 218 balls.

Joe Root earned his team the breakthrough, dismissing Pant for an entertaining 146 off 111 balls. The 222-run stand between Pant and Jadeja finally ended in the 67th over after Zak Crawley caught Pant at the slip.

This brought Shardul Thakur to the crease. He was dismissed by Ben Stokes for one, caught by wicketkeeper Billings.

Mohammed Shami was the next man on the crease. India ended the first day of the match in a comfortable position.

India was 174/5 at Tea due to an unbeaten 76-run stand between Rishabh Pant and Ravindra Jadeja.

India were struggling at 98-5 when the duo joined forces.

Resuming the innings at 53/2 after lunch, the duo of Hanuma Vihari and Virat Kohli added eleven more runs to their partnership, before Vihari was dismissed for 20 after being trapped leg before wicket by pacer Matty Potts.

This brought wicketkeeper-batter Rishabh Pant to the crease. Kohli was soon back to the pavilion as well. He was caught by fantastic delivery from Potts at 11 runs, with the ball hitting the inside edge of his bat and hitting the stumps. Shreyas Iyer then came to the crease and was looking good and hit Potts for three fours. But he was dismissed for 15 by James Anderson after being caught by wicketkeeper Sam Billings.

All-rounder Ravindra Jadeja was next on the crease.

Rain played a spoilsport earlier on in the match.

Put to bat first, Shubman Gill and Cheteshwar Pujara came to anchor the innings. England got their first breakthrough in the seventh over, when James Anderson dismissed Gill, who departed after scoring 17 runs, leaving the team’s total at 27/1.

Vihari came to the crease and tried to stitch a partnership with Pujara. The duo took India’s score to 46 before Anderson struck again and sent Pujara back to the pavilion.

Kohli joined hands at the crease with Vihari and took India’s total at 53/2 before rain.