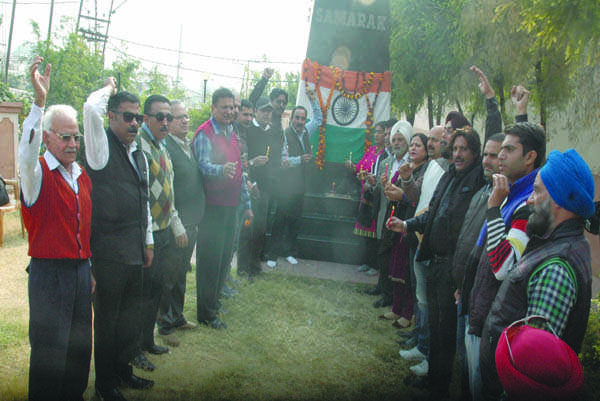 Jammu and Kashmir Freedom Fighters Association (JKFFA) on Wednesday paid floral tributes to army personnel who sacrificed their lives for the sake of nation while on duty.

The programme was organized at Dogra Shaurya Stambh Amphalla, here under the chairmanship of JKFFA President Ved Gandotra.

These Shaheed Indian soldiers martyred during fight with Pakistan sponsored terrorist group at Nagrota and Ramgarh.

“We all people of Jammu and Kashmir salute them for their bravery and they fights with strong will and for the cause of our Nation,” Gandotra said.

He warned Pakistan that is it has a guts then fight and face Indian soldiers from front.

State Chief of All India Human Right Association, Sham Lal Bhagat, while paying homage to the martyred jawans, asked the Union Government to take strict action against Pakistan and teach it a lesson in his language. He said that the Karwan-e-Aman bus service between India and India should also be terminated forthwith.

Speakers expressed their anguish over the cowardly act of Pak sponsored militant groups. They also urged all political parties to extend support to the Centre so that it could take appropriate action against the perpetrators of the crime.

A two-minute silence was also observed in the memory of all those who sacrificed their lives for the sake of nation.