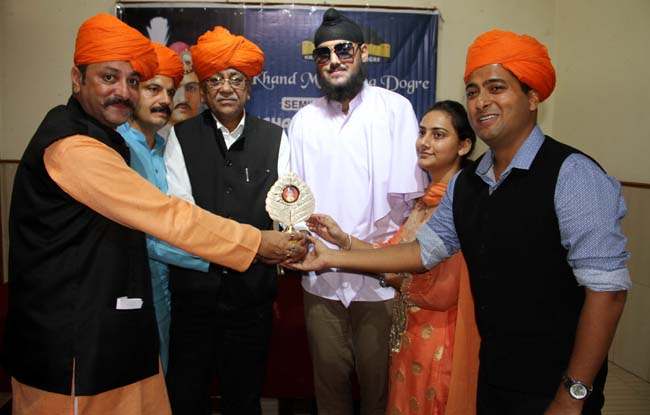 “Khand Mithe Log Dogre” – a body promoting rich culture of Dogras—on Thursday initiated a programme to bring Jammu under one umbrella during a seminar organised under the title “Saade Maharaj Hari Singh Ji”.

The seminar was organised two days ahead of Maharaja Hari Singh birth anniversary here at Press Club of Jammu. Chairman and President of “Khand Mithe Log Dogre” Er Himanshu Jai Hind and Arun Slan also announced “Sher-e-Duggar” awards on the occasion for the personalities of Jammu, who have contribution in different fields.

Speaking on the occasion, B S Slathia, the main speaker, said that holding seminars and debates of saving ‘Dogriyat’ has become a compulsion in present scenario. He said that it is only because of Maharaja Hari Singh, the state of Jammu and Kashmir is an integral part of India.

“Many Kashmir centric forces tried to wash out our history from records but truth cannot be hidden,” said Slathia adding that Maharaja introduce Infant Marriage Act, Untouchabilty Act and many others to safeguard the people of this princely state.

“It was only because of Maharaja Hari Singh, High Court was established and his judicial advisors were appointed as Judges ,” said the BAJ president and added that accession of J&K with Dominion of India was also because of him.

On October 26, Maharaja Hari Singh wrote a letter to the Union of India for Accession and on October 27, he signed instrument of accession in 1947 to save the state.

Team Jammu Chairman Zorawar Singh Jamwal while having all words of appreciation for the organisors, said, “the ‘khand mithe log dogre’ team is also doing an appreciable task of preserving forts of Jammu, which speaks of our history and Dogra heritage.”

Meanwhile throwing light on the life history of Maharaja Hari Singh,  Zorawar Singh Jamwal said that many people may not know that he (Maharja) in his youth while studying in Mayo College in Rajasthan, was not only named as class monitor but also the House head and it was historic that for the first time, a student was given two top posts.

“Maharaja not only worked for the upliftment and betterment of the society but he was an example of secularism,” he added and said that many political parties now a days are beating the drums of ‘beti padhao, beti bachao’, but Maharja Hari Singh in 1931, brought these laws against female foeticide, right to education.

“We are proud Indian only because of Maharaja Hari Singh as his contributions towards the society are unforgettable. We all are indebted to him,” he said and added that leaving aside all political aspirations, Jammu must demand Holiday on 23 September—the birth anniversary of Maharja Hari Singh—the last ruler of Dogra Dynasty.

JKNPP president Balwant Singh Mankotia in his address said that it was only because of Maharaja Hari Singh, Jammu and Kashmir is part of world’s largest democratic set up.

“He faced lot of pressure in the hands of communal forces but he did not bow down,” he added and said that the matter over Holiday on his birth anniversary should not be politicised.

Gourav Gupta, Secretary CCI also spoke on Maharaja Hari Singh and his life history. He appealed to the youth of Jammu to unite for Jammu and save the Dogra culture.