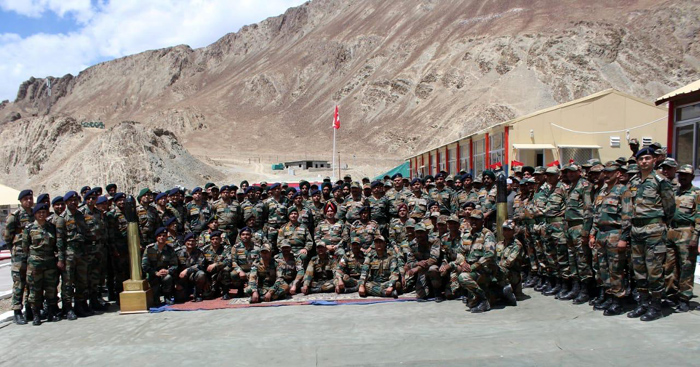 During the Pakistani aggression of 1948, Lt Col (then Maj) Khushal Chand was responsible for safeguarding the Khaltse bridge & preventing the enemy’s advance towards Leh.  He used Guerrilla Warfare to misguide the enemy of his actual strength.  On one occasion, he alongwith just one sepoy halted the enemy’s advance for 24 hours & subsequently burnt the bridge delaying the enemy for a week’s duration.  For this gallant action he was awarded the Maha Vir Chakra.

Indian Army is celebrating the Year 2019 as the ‘Year of Next of Kin’. On this occasion, the family of Lt Col Khushal Chand, MVC, to incl his two sons and daughter were also present at Khaltse.  The event was attended by a large number of Veterans, NOKs & Veer Naris.  The Army Commander interacted & felicitated various award winners, while the Regional President AWWA  felicitated the Veer Naris and NOKs from the Ladakh Region.

Later  in the evening, the Northern Army Commander and Regional President AWWA visited the Hall of Fame, Leh. The Hall of Fame at Leh was established in 1986 to showcase the valour, sacrifice and achievements of the Indian Army in various operations in Ladakh, in addition to displaying the culture and heritage of the Ladakh Region. Over the last three decades, the institute has become a major attraction for domestic and foreign tourists alike, having an annual footfall of over 1,50,000 visitors.

The institute has a dedicated gallery christened as ‘Heroes Gallery’ dedicated to the brave soldiers whose gallant acts in wars fought on the icy peaks of the region have immortalised them in the history of our Nation. It houses information boards, with the photos and citations of all PVC and MVC awardees, who displayed conspicuous gallantry during operations in the Ladakh Region.  A total of 42 gallantry award winners including seven PVCs adorn the gallery.

Lt Gen Ranbir Singh, GOC-in-C Northern Command was presented the artefacts of Lt Col Khushal Chand, MVC consisting of his uniform, original MVC medal, service and miniature medals by his family members, to be preserved at the Hall of Fame. Replicas of the same were also presented to the family members.  In addition, the original letter written by Lt Col Prithi Chand, MVC of 2/8GR, to Mr Sonam Anchuk, resident of village Achinatang, for assistance rendered to the Indian