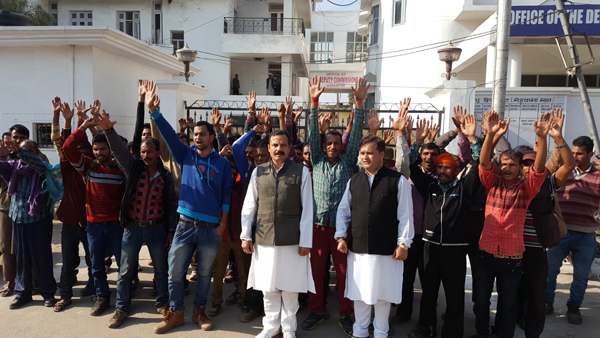 JK News Today
Udhampur, Nov. 18
Panthers Party today held protest demonstration under the leadership of  Balwant Singh Mankotia president JKNPP along with local public of Saddal village of Panchari which was washed away in 2014 floods in which 40 people were buried alive.
Speaking on the occasion  Mankotia said that during fash flood around 150 were forced to migrate after their houses got buried in massive washout . He said that these people were not given any compensation and none have been rehabilitated. “They (affected people of Saddal village) are running from pillar to post without any heed from government, ” President JKNPP said.

He regretted at apathetic attitude of local Member Parliament and MOS in PMO Dr Jatindra Singh who had announced that Saddal village would be developed as  “Adarsh village”. But after lapse of more two years not even single development work has been taken up for execution and no road map has been adopted for the rehabilitation of badly effected people.
Mankotia warned the state as well as central government for rehabilitation and compensation at the earliest “otherwise get ready to face the consequences”.
Later deputation of these aggrieved people also met with deputy commissioner Udhampur to reiterate their demand for early rehabilitation. Deputy commissioner assured the agitating people of early redressal of their problems.

Two factions of Hurriyat Conference to be banned under UAPA