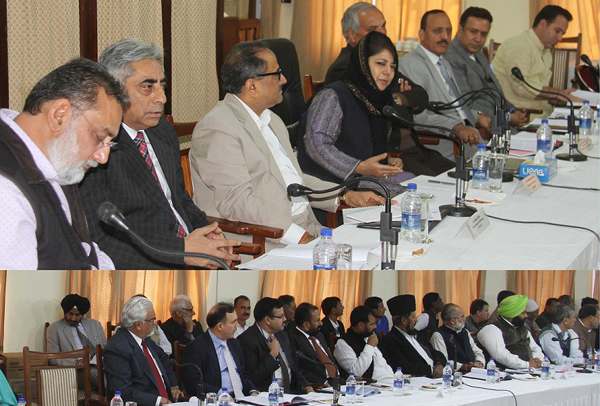 Flagging crop insurance and marketing support to the produce as key to restore the confidence of farming community in the agriculture sector, Chief Minister, Mehbooba Mufti today directed the administration to see how these two facilities are ensured to agriculturists even as she suggested use of CDF funds to give a push to rural economy.

Chairing a meeting of J&K Board for the Development of Kissans here today, the Chief Minister said over the decades farmers have started losing interest in the trade due to poor or unstable marketing facilities or fear of crop loss in the event of any natural calamity like drought, hailstorm, floods etc. She asked the administration to plug the loopholes in this regard and see how various schemes and programmes meant for marketing agricultural produce and insurance of the crops are effectively and extensively executed on the ground. Likewise, she said, transportation also plays a role in the timely dispatch of the agriculture produce to mandies and directed augmentation of the same.

The Chief Minister, who is also chairperson of the board, said, “rural economy needs to be given a push as other economies have either reached a saturation stage or are not so rewarding”. She added ” agriculture and allied sectors still hold a good scope of employability in rural and semi-urban areas”.  Chief Minister  said that if concerted efforts are made agriculture would see a turnaround in the coming four to five years.

Mehbooba Mufti expressed happiness that procurement mandies are being set up in many areas of the State which would enable farmers in stabilization of selling price of their produce. She said also more and more soil testing labs are being set up to advise farmers which land is suitable for which cultivation. She suggested commercial exploitation of wild foods, herbs and mentioned specifically Anar Dana to be promoted for commercial cultivation.

The Chief Minister mentioned the demand of flowers in our daily life and asked the Floriculture Department to promote flower cultivation in a big way. She suggested that the Market Intervention Scheme should not be restricted to fruits only but be extended to flowers and other produce. She said funds won’t be a problem in this regard.