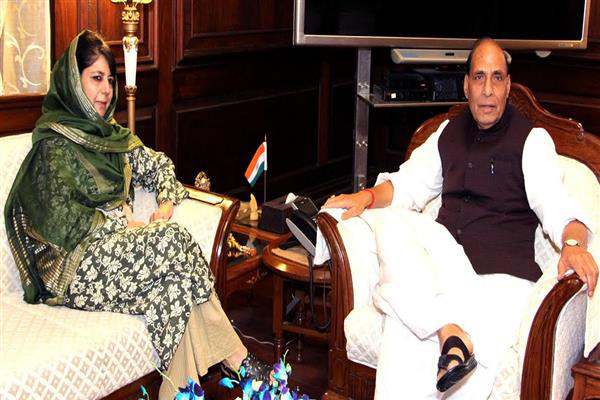 Jammu and Kashmir Chief  Minister  Mehbooba Mufti has asked  Union Home Minister  Rajnath Singh in a meeting in  New Delhi on Thursday that the time has come that the Valley should be looked beyond the security prism as the pure security- centric focus  could result in serious problems yet again.

Mehbooba Mufti who had nearly  half-an-hour long meeting with Home Minister recalled the situation  in the last five months of 2016 and contrasted it with the  current situation, where the cradle of dialogue was needed to consolidate the  mental corridors for peace . The peace  will not appear in a vacuum, some  initiatives are must for achieving this objective , the Chief Minister underlined, according to the sources.

The mood in Kashmir would  brighten once the dialogue gets started and all the stake holders, particularly  separatists should be taken on board . That would help in consolidating  peace and order in the Valley and other parts of the state, the sources close to Mehbooba Mufti told J K News Today

It was first meeting of Chief Minister with the Union Home Minister this year, though the two have been speaking to each other on regular bases by phone .

Home Minister who also is busy with the Uttar Pradesh Assembly elections, assured the Chief Minister that  Centre would not be  found wanting in  its efforts to stabilize the political and economic situation in the state.