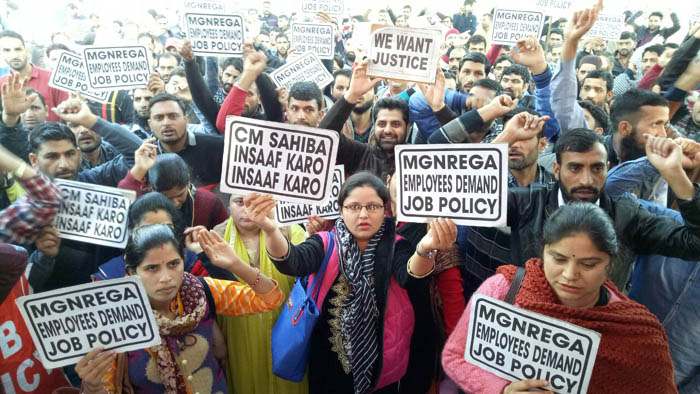 Hundreds of MGNREGA workers under the banner of All J&K MGNREGA Employees Association today once again protested strongly against PDP-BJP state government on favour their demands. The workers from various districts of Jammu region and parts of Kashmir province too joined the protest rally. They were demanding regularization of all type of workers engaged under MGNREGA.

Earlier, these workers also held a similar protest outside Raj Bhawan on Thursday on the 10th consecutive day of protest program and then started protest demonstration.

MGNREGA employees association’s Provincial president for Jammu Sandeep Kalotra and president Kashmir Division, Jan Mohammed besides others  alleged that despite assurance by the RDD Minister Abdul Haq Khan to frame a  policy for the regularization of MGNREGA workers, nothing has been done by the Government.

They said that these workers including GRS, Technical Assistants, MIS Operators are being exploited by the Government and are being provided just peanut salaries. Many of them are highly qualified and they are going to be over aged.  They warned the Government to frame the policy for the regularisation of these workers otherwise they will intensify the agitation.

The furious MGNREGA workers today attempted to take out protest march towards Civil Secretariat and tried to Gherao the premises but, a large contingent of state police had not allowed them to move inside the secretariat and after a scuffle with the cops, the agitating workers dispersed.