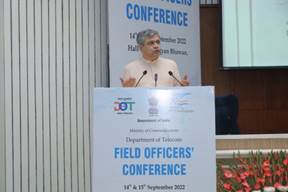 The Minister for Communications, Electronics & Information Technology and Railways, Shri Ashwini Vaishnaw has said that the Telecom Sector in the country will witness more reforms in coming years and asserted that the industry too will have to do its bit and reciprocate by improving quality of service significantly. He was addressing the Annual Flagship Event 2022 of Digital Infrastructure Providers Association (DIPA), an apex industry body representing Digital Infrastructure providers industry in India, here yesterday. The Minister of State for Communications, Devusinh Chauhan and other dignitaries were present on the occasion.

Ashwini Vaishnaw said that service quality parameters have to be significantly increased, and the Telecom Department should approach Telecom Regulatory Authority of India (TRAI) in this regard. He advised the Telecom Department to send a new consultation paper to TRAI for significantly increasing the quality-of-service parameters almost making it 3X or 4X of what it is today.

The Minister said that the journey of 5G is going to be very exciting and noted that many countries took multiple years to reach 40% to 50% coverage. But we are targeting a very aggressive timeline and the Government has given a target of 80% coverage in short time frame and we should definitely cover at least 80% in a very short timeframe, he added.

Ashwini Vaishnaw said that the industry including Telecom Operators and Infrastructure Providers to move full steam ahead on improving quality of services in the country, now that a slew of reforms had been announced and more were lined up. The Minister said initiatives cannot be one-sided, and the equation has to be reciprocal, he added.

While addressing, the Minister of State for Communications, Shri Devusinh Chauhan has said that our country is transforming from Developing Country into Developed Country and the Telcom Sector’s role is crucial in achieving this. He referred Prime Minister’s Reform, Perform and Transform which should be the slogan of this sector to move ahead.

Devusinh Chauhan said that the last mile connectivity is very crucial for the development of Telecom Sector and he advised the Telecom operators to work hard in this direction. He further said that the 5G connectivity should play a major role in providing Health, Education, Mining, Transportation, Logistics fields etc. DIPA should play a pivotal role in this regards, he added.

The theme of this year’s Annual Flagship Event was “Gati Shakti Vision For 5G & Beyond”.

During the event, EY-DIPA White paper titled ‘GatiShakti— paving the way for an accelerated digital infrastructure rollout in India’ was also unveiled. The paper focuses on the fact that the advent of 5G is going to be a game changer for India and is likely to have a profound impact on the socio-economic fabric. 5G is expected to lead to a surge in data traffic, which will necessitate upgrading existing networks and build new Greenfield ones. with a key focus on the future of trends in telecommunication industry.