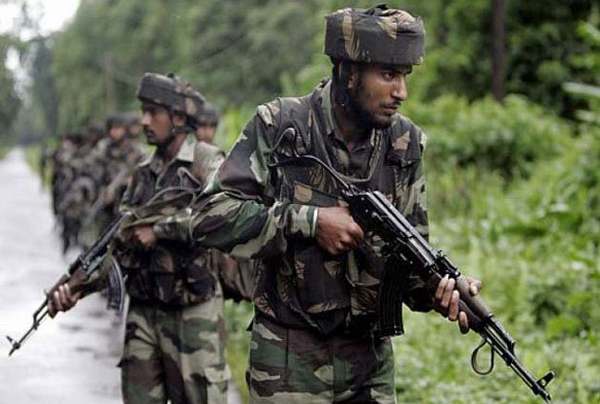 Soldiers were seething with anger and bursting to take revenge  against an invisible enemy   after having seen seven of their colleagues  dead at the hands of three terrorists .   These feelings overwhelmed all soldiers  far and wide across the  16 Corps ( White Knight) jurisdiction  in Jammu region . The Corps’ troops are responsible for facing the external aggression on borders and tackling  terrorism in entire Jammu region, barring the international border .

Pakistan’s hand was clear in  infiltration  at the international  border  in which all the three terrorists were killed by the  BSF in Samba  sector , and so was in the “ fidayeen” attack in  Nagrota where Indian army lost seven of its men.

The anger was genuine  because time and again the terrorists have succeeding in attacking their camps and each time  they leave their colleagues dead and a trail of tragedy  and a host of  questions . This time, what happened on Tuesday, the army  appeared to have lulled itself that Pakistan would not dare to mount any attack  because of the intensified  counter offensive by the Indian army at the LoC  last week, in which, Minister for Defence   Manohar Parrikar  claimed that “ Pakistan pleaded that we stop our offensive.” But, it should not have been forgotten that Pakistan has more than  LoC to  cause trouble in  India, especially Jammu and Kashmir.

This is what angered  the soldiers more, for they knew that the  Nagrota attack was not the isolated incident, there may be more and they would have to be prepared with the response. And, the only response to this, they concluded, according to sources, was to decimate the terrorism  in Jammu and Kashmir. There has to be  an all out offensive where terrorists should be killed at the LoC and their hideouts, instead of allowing them to  gain time and  space to “ hit us in our camps.” These cries for revenge  were  heard  across all the army camps in Jammu .

Now it remains to be seen as to what would be the next move of the army, and how would  army trace this attack to Pakistan and seek persecution of the perpetrators sitting in Pakistan .  In the past all such  attempts have got stuck in the denial wall of Pakistan.