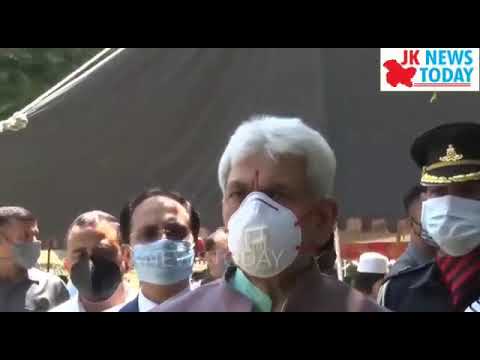 When new Lieutenant Governor  of Jammu and Kashmir Manoj Sinha  said that there would be a dialogue with people  for peace in Kashmir, it  had  an out of box  connotation .

This  was  an assurance of  knitting together the development and peace  with  a simple demand that the misled groups of youth should say goodbye to the gun culture  of more than 30 years . It is out of box because it makes the people as the only stake holders. They want peace . Peace is the fountainhead of  progress, prosperity , and without peace nothing can be achieved .

Sinha was reflecting on  the thinking of the Centre that he represents as LG of the Union Territory of Jammu and Kashmir .

Manoj Sinha who is known for  making the statements that can be translated into reality  has outlaid  his agenda for Kashmir obviously with something concrete in his mind . Since, he  is  a confidant of Prime Minister Narendra Modi , it means that his words have firm backing of Delhi.

The dialogue  with  the people is  a political and administrative messaging that  all the people are entitled to interact and initiate the process of dialogue, for it is not necessary that the dialogue would flow from Raj Bhavan or  North Bock in Delhi  only. It could be other way round, too.

In Kashmir, however, the dialogue is seen  through the prism with the talks with separatists  who had been leading a campaign of secession .Now , as  it is clear that the  mainstream parties and their leaders, too, have  their grievances ranging from the political vacuum, shrinking of their political space  and  restoration of statehood .

It requires a mutual understanding  and accommodation to give a fillip to the narration of peace in Kashmir.