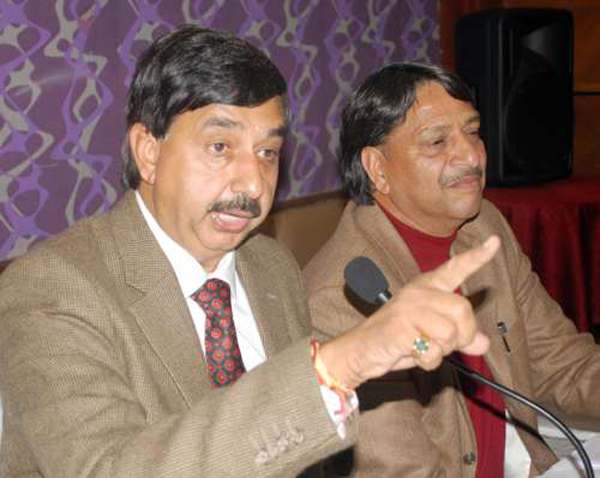 UDHAMPUR NOVEMBER 15: Former Minister of State for Finance in the Mufti Mohammed Sayeed led PDP-BJP government and MLA Udhampur Pawan Gupta on Tuesday strongly criticised General Sales Tax amnesty in Jammu and Kashmir and described it as a premium to tax-evaders.

“Instead of making the tax evaders accountable for withholding the taxes already paid by consumers, the PDP-BJP Government has rewarded them by not only opening window of exit but also swindling huge sum of money that would have otherwise become due the state”, Pawan Gupta said, adding that this is a huge scam which has been legalised by the supportive dispensation.

He said politico-administrative nexus is against the interests of the state and, therefore, he will be exploring legal options to make the defaulters pay through their nose. “Those at the helm in the state government now the backdrop in which the SROs with regard to amnesty have been issued because there has been lot of pressure for allowing a waiver”, he maintained.

Pawan Gupta said that overt and covert attempts were being made during his tenure as Minister of State Finance but he had stood between the beneficiaries and the decision makers. “Finally, the unscrupulous tax-evaders, who are deep rooted in the present government have succeeded in getting their nefarious proposal through”, the MLA Udhampur said.

The former minister said the rhetoric of the PDP-BJP dispensation about being custodians of the public interest is just a façade, as they are actually working for safeguarding the interests of unscrupulous elements who have virtually fleeced the state exchequer. “On the one hand this insensitive and anti-people government is levying service tax on helicopter operations in the Mata Vaishno Devi Shrine sector on the excuse of financial crunch and on the other hand unscrupulous elements are being rewarded by way of amnesty”, he added.

“The government should forthwith rollback these SROs and take stringent action against the defaulters, who have flourished on the public money for over a decade”, Mr Pawan Gupta said and warned that in case of failure, he will be his exercising his right to seek legal recourse as a conscious citizen and representative of the people.