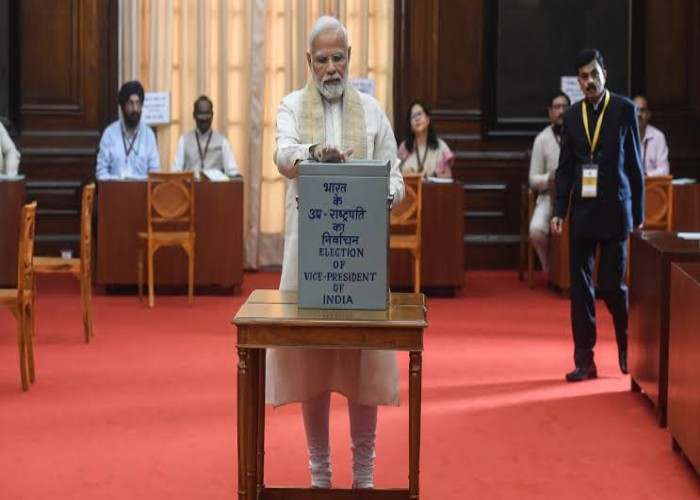 As the term of incumbent M Venkaiah Naidu ends on August 10, members of both Houses of Parliament are voting to elect the next Vice-President of India on Saturday. Prime Minister Narendra Modi, Home Minister Amit Shah, Congress MP Manmohan Singh were seen casting their vote at the Parliament House on Saturday. While the National Democratic Alliance (NDA) has announced West Bengal Governor Jagdeep Dhankhar as its vice-presidential candidate, Opposition parties have nominated Margaret Alva. The polling to elect the new Vice-President of India began at 10 am at Parliament House in New Delhi and will go on till 5 pm, after which counting of votes will begin.

For the 16th Vice-Presidential election, the Electoral College consists of 233 elected members of Rajya Sabha, 12 nominated members of Rajya Sabha, and 543 elected members of Lok Sabha, adding up to 788 members. With support from regional parties like the Janata Dal (United), YSRCP, BSP, AIADMK and Shiv Sena, Dhankhar, is set for an easy win with over 515 votes. Alva is likely to get over 200 votes with the backing of Aam Aadmi Party (AAP), Jharkhand Mukti Morcha (JMM) and Telangana Rashtra Samithi (TRS). The Opposition camp is evidently divided once again. The Trinamool Congress (TMC), the second largest Opposition party after the Congress in Parliament with 39 MPs in both the Houses, has decided to abstain from the vote. It is to be seen whether the Opposition will be hit again by cross-voting like what was witnessed in the Presidential election last month.

While the 71-year-old Dhankhar is a Jat leader from Rajasthan with a socialist background, 80-year-old Alva is a Congress veteran and has served as governor of Rajasthan and Uttarakhand.