PM should visit LOC of the state and declare war with Pakistan, says Sunil Dimple 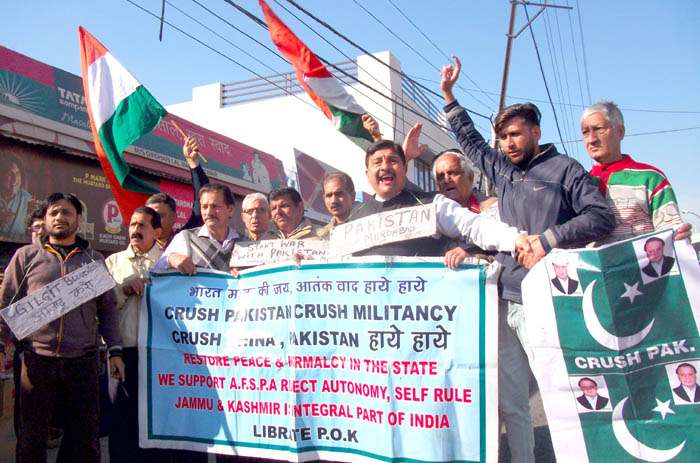 Dimple led anti Pakistan protest rally against the killing of our one major four army jawans by the BAT border action team of Pakistan, shelling on the residential villages in fresh firing on LOC,  in poonch, rahouri, bala kot, mendhar.

Addressing the protesters Sunil Dimple demanded the prime minister of India Narinder Modi to tell the people of the nation on the floor of the on going parliament session the factual prevailing situation of the jammu Kashmir state.

He also demanded PM to tell the nation, what protest registered with Pakistan on the frequent cease fire violations and the steps taken by the central BJP Govt.

He also demanded prime minister to take effective steps for the release Kalbushan Yadav from Pakistan the Pakistan jail, as the Pakistan has awarded death stance to him.

Dimple alleged our brave young army major and jawans sacrificed their lives for the state and nation. But our chief minister Mahbooba mufti has no time to visit the brave army martyrs to pay them tributes and the words for the condemnation of the Pakistan.

He urged the prime minister to tell the people of the country and the state on the floor of the parliament about BJP central govt foreign policy of India against the Pakistan for funding the terrorism and the war started in the jammu Kashmir state.

Dimple also urged the prime minister Modi to disclose the people of the country, in the parliament that what are the central govt and the state BJP-PDP govts, achievement to control militancy in the state? And why the Jammu Kashmir state is unrest? Why Kashmir burning is for the last three years?

He urged Narinder Modi there is going on multi dimensional war in the jammu Kashmir state internally and on LOC with pakistan.

Dimple demanded Prime minister Narinder modi to start war Pakistan and no Indo-Pak talks and dialogue with Pakistan and separatists. .

He demanded NIA for immediate life term arrest of separatist Huriayt leaders Sayeed Ali Shaha Gelani, Yasin malik and Mirwaiz omr Farrok by NIA. As they have destroyed the peace and development and Pakistan agents sitting on Indian soil.

Dimple demanded to impose the governor rule in the Jammu Kashmir state for at least one year, if BJP central govt seriously wants to end militancy and Kashmir unrest.

He said prime minister the state BJP-PDP govt has totally failed to meet the challenges of the Pakistan and complete failure of the Govt machinery for the last three years there is Kashmir unrest.

He said it is very unfortunate that the central govt has also failed to check the Pakistan nefarious designs and in giving them befitting reply.

He alleged the prime minister is silent hiding the factual position from the state from the people of the nation and the present prevailing situation in the state.

Dimple expressed anguish, concern over the release, withdrawal of the FIR registered cases on the stone palters,  the chief minister Mahbooba mufti demand for the INDO- PAK talks at a time when the Pakistan has started war with India and separatists forces are burning Kashmir and made hostage to the people of the kashmir valley for the last 27 years militancy.

He said PM all the INDO -PAK talks formulas with Pakistan have failed.

Dimple urged upon the prime minister to start surgical strikes, war with Pakistan enter pok, gilgit and blouchistan and destroy the terrorist training camps in POK.  attack on the army pickets of Pakistan.

He said without wasting any more time impose the Governor rule and save the state from further destruction as our security Jawans are sacrificing their lives.

He demanded prime minister to attack on Pakistan and liberate POK, Baluchistan and Gilgit from the Pakistan.

He said Pakistan is recruiting many youths of our country and our state as per intelligence security reports.

Dimple demanded the prime minister to dissolve the state assembly and Unholy BJP-PDP alliance Govt, to save the state from further destruction.