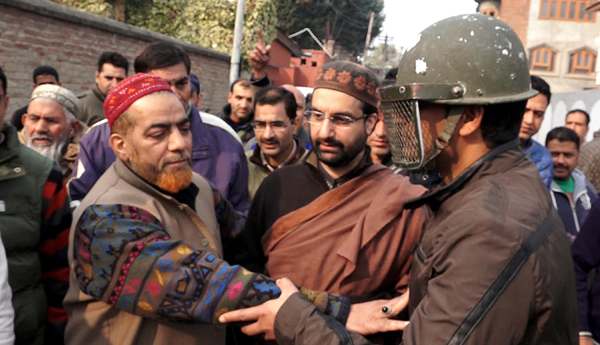 Police today arrested All Parties Hurriyat Conference chairman  Mirwaiz Umar Farooq when he came out of his Nageen residence to march toward historic Jamia Masjid on Friday.

Mirwaiz defied the house arrest and emerged out of the  gate of his house, only to  be arrested by the policemen, who took him to Nageen police stations.

Today was the day of march to Jamia Masjid, the grand old mosque of Srinagar, which has been out of bounds for devotees now for more than four months because of the apprehension of big trouble between the  stone throwers and security forces  after the congregational prayers.

The police said that they were apprehensive of the clashes and violence, that’s why the arrest of the Mirwaiz as a precautionary measure.

The authorities apprehend trouble . “ This is a precautionary step to  maintain law an order and keep the trouble makers at bay,”  a police officer told JKNT.

Earlier, the authorities  had  posted a contingent of policemen to keep All Parties Hurriyat Conference  Chairman (M) Mirwaiz Umar Farooq and arrested and shifted the JKLF leader Mohammad Yasin Malik to the  Central  jail , Srinagar.

It is the usual scene  on Fridays in Kashmir since July 8 after the death of Burhan Wani.