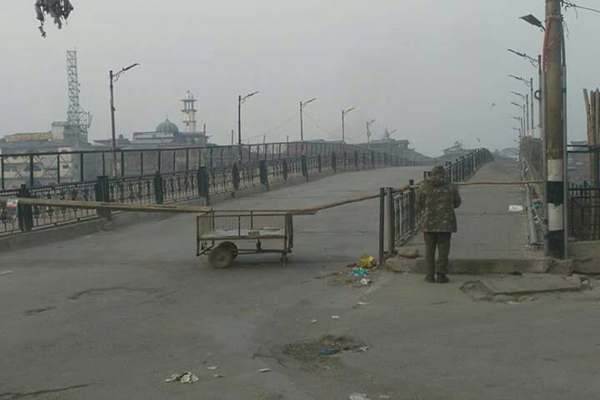 Monday to prevent proposed protest march called by the separatist leaders to Lal Chowk– one of main icons and commercial hub of the city.

“Restrictions have been imposed around Lal Chowk area to “maintain law
and order”, as Sec 144 is already in force in Srinagar,” said Police
official
In the calender issued by the separatists  Mirwaiz Umar Farooq,  Syed Ali Geelani, and
Muhammad Yasin Malik were scheduled to lead a protest march to Lal Chowk today.

It is pertinent to mention here  that the movement of the three leaders is restricted and they are kept in confines of their homes.

However, authorities allowed Mirwaiz Umar Farooq to address the Friday
gathering at Jamia Masjid In Srinagar on December 02.

Kashmir valley is facing unrest since killing of Hizbul Mujahedeen Commander Burhan Wani on 08th July. Clashes erupted immediately after that between civilians protesting killing of Burhan (a poster boy) and security forces. Till now 97 people including a couple of policemen have been killed and about 15000 injured among whom many have been blinded or have serious pellet injuries.

Separatists have been pushing the protests by calling for shutdowns and protest marches.
For More News Update Click Here