RSS chief  for action against anti-nationals in Kashmir 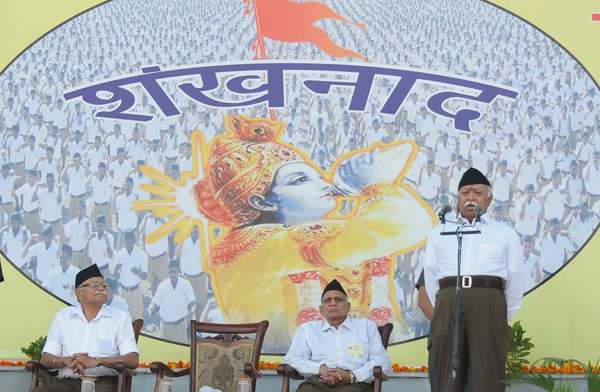 RSS chief Mohan Bhagwat has  made it  abundantly  clear that  the problem in Jammu and Kashmir would have to be  addressed and resolved  shedding the  dilly-dallying approach of the past  and  the resolution should come without compromising the  sovereignty and integrity of the country.

Bhagwat in his address to the RSS cadres  here on Sunday , which was attended among others by the  BJP ministers  and legislators in the coalition government , was unsparing in his  talk on the  nation’s sovereignty .

Talking against the backdrop of the recent unrest in Kashmir- the  sign of the  trouble and unresolved problem as also the  terrorism promoted  by the forces from across the border , Bhagwat said that the “ road has to  be found for the solution  without compromising national integrity and sovereignty.”

“ We shall have to overcome  the failures of the past . We cannot live with the failures in perpetuity,” the RSS chief said  in  not to unveiled warning to the central government.

Taking a dig at the BJP ministers in the PDP-led coalition government, who are alleged to have distanced them from the masses , he said , “ no one should forget that  all of them are the elected representatives of society. And society is supreme in  a democracy.”

Mohan Bhagwat  was speaking on the opening day  of his two-day visit of Jammu and Kashmir to  take stock of the critical situation . The  feedback about the government and the growth of the anti-national landscape has been disturbing.

It is expected that he would send his message to the NDA government to get the things back on track in Jammu and Kashmir.