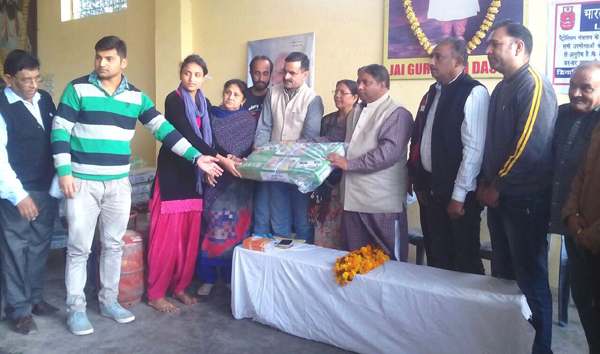 Sharma distributed about 30 gas connections to the ladies which will in turn benefit a lot to same number of families of Kabir Nagar and other adjoining areas of Ward 40 of Talab Tillo. The BJP President was accompanied by a large number of people including local residents, social and political activists of the area.

Speaking on the occasion, Sat Sharma said that it is indeed a great initiative taken up by the Prime Minister Narendra Modi which today has resulted into benefitting over 5 crores families across the nation.

He said the humanitarian view of our Prime Minister has led to this vision which has resulted into improvement of life style of majority of BPL families in India.

He said that a list of people specifically women belonging to BPL families in Jammu West has been made Ward Wise from every 26 wards of Jammu West, and in the coming days  the benefit of “Pradhan Mantri Ujjwala Yojana” and other centrally sponsored schemes  would also be given to them so that big relief  could be provided to them.

Throwing light on other schemes of Modi Government as well, Sharma stated that in today’s date dozens of schemes of Central Government are available for common man and BJP has made it a prerogative that every needy person gets benefit of these schemes and teams at booth level will be prepared so that such schemes are implemented at ground level.