Thali Dance of Ramban : a beautiful expression of local culture 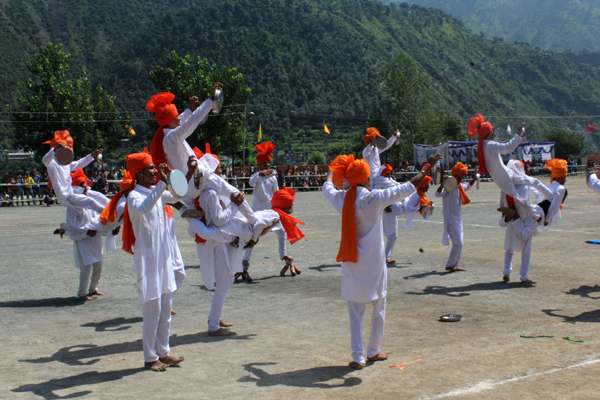 The vibrant culture of Jammu and Kashmir is a beautiful amalgamation of religions, festivals, food, art, crafts, dance, and music which fills its  canvas with  hues and vibrancy of all sorts.

Our rich heritage ,customs and rustic  lifestyle is magnificently reflected in our  traditional folk songs, musical instruments and dances  forms like Rouf, Dhamali, Hikkat, Bhacha Nagma, Chhakari, Kud, Geetru, Gatika, Phumania etc which are not just the manifestation of our emotions but reflect the prevalent socio cultural ethos of a particular area and beliefs of  its people .

Among the varied dance  forms the colourful “ Thali dance” of Ramban is sheer reflection of the  age old customs and life styles of the rural people reflecting the mood enthusiasm and gaiety   associated with the social events and sense of  celebrating them together .

Thali Dance was popular among people of Ramban in old time who used to perform it during Kirtan or Jagrans to appease local deities. Accordingly, a function was held at night wherein large number of people was invited to sing religious songs during the night followed by Arti or Bhog to the local deities in the morning. During Arti one of the persons danced while keeping Thali (plate) filled with sweets in his palm. At present, one can still witnesses this tradition in some rural societies.

As per another folk tale, It was the time when hilly people of Ramban had no source of amusement.  In weddings, Thali dance was played by groom after sitting on the shoulders of Mama (maternal uncle) with Thali in palm on concluding day of the ceremony. Usually along with Sehra (wedding accessory) some money was also kept in the plate. This tradition was attributed to successful completion of marriage ceremonies. The relatives and guests used to enjoy this dance besides cracking jokes and making fun with bridegroom and one another. Besides this, Flutes, Narsinghas and drums were also played during marriages. It is believed that some of the rural areas still preserve the culture of Sehra dance.

The uniqueness of Thali Dance comes with the beautiful   customary dogra dress with colourful Safa (Turban). Traditional Murli (Flute) and Dholki (drum) are played together on the sound of Shiney (two flat plates). During dance Narsingha is also blown loudly. The music team comprising two flute players, Dholki master and his associates perform sitting while as dancers after making entry in a row with two steel plates on their palms move in a circle very aesthetically. Many swinging and skilful movements with the plates are made. The dance begins in slow beat followed by rapid and complex steps. Eventually, one of the artists also wears a colourful Ghagra (traditional skirt) which moves beautifully with every movement of the dancer .Sometimes over plates, glass filled with water or katori (bowl) are also placed in order to attract the audience. With changing times the artists are incorporating new steps to make it even more appealing.

Initially Thali dance was only limited to the hilly areas from Siraj to Pogal Paristan and in some other parts. One brass Thali (plate) was used during dance by a single person and followed by two plates later on.  But after 1993, with the untiring efforts of Raj Singh Raju, a local school teacher, this dance was expanded to whole of Ramban by replacing brass plate with the steel one. For the very first time, Thali dance by two students presented on the occasion of Republic day in a Higher Secondary School Ramban got big round of applause and message of its uniqueness was spread. People, who witnessed it, appreciated and encouraged the local artists for its expansion to other areas. Progressing on the same line, the artists introduced some changes. The size of the participants was gradually increased and at present more than 30 persons is performing together.

The artists have performed at various important events in the state and at the national level and have received great appreciation.

This traditional folk dance being nurtured by the locals reflects the rustic innocent lifestyle that is holding on strongly to its cultural ethos beliefs and art forms. The artists of Thali dance are making Endeavour to preserve this cultural symbol. A ray of hope has emerged from the fact that the youth of the region is showing keen interest  in learning and performing this dance. Their deep rooted love, cultural affiliation and passion for the traditional dance is reflected in every performance and ensures that our ethos will be preserved and propagated for generations to come. At present women especially the girl are showing keen interest in learning the  Thali dance  and are making  performances which are being highly appreciated .

There is dire need to promote this traditional dance and to give the local artists a chance to present their talent at bigger platforms so that people get an insight into the rustic life style, the attires, musical instruments and other practices which are a part of customs of the hills.