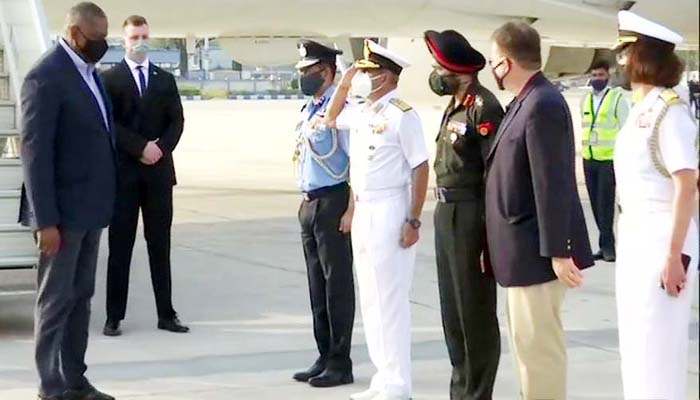 US Defence Secretary Lloyd J Austin III arrived in New Delhi on Friday on a three-day visit to India.

Austin is set to meet Defence Minister Rajnath Singh during the visit. In the evening today, India’s National Security Advisor Ajit Doval and Austin are also likely to discuss China and important regional security issues including Afghanistan during the first visit by a top Biden administration official to India.

The discussions between the American Defence Secretary and the NSA would be the first major interaction between the two sides during the visit.

He is expected to meet the External Affairs Minister in the second half on Saturday.

Austin is visiting India from March 19 to 21 and is scheduled to meet the top political and military leadership of the country.

India and the US have been working closely with each other after the Chinese attempts to change the status quo in the eastern Ladakh area in April-May last year.

The US side also helped by providing timely defence hardware supplies during the conflict apart from sharing important satellite feed and inputs.

Indo-Pacific region is largely viewed as an area comprising the Indian Ocean and the western and central Pacific Ocean, including the South China Sea. China’s territorial claims in the South China Sea and its efforts to advance into the Indian Ocean are seen to have challenged the established rules-based system. Moreover, China has criticised the framework as an Asian version of the North Atlantic Treaty Organisation seeking to undermine its legitimate rise.

The Indian defence ministry said that Austin’s visit to India as part of his first overseas travel emphasises the strength of the India-US strategic partnership.