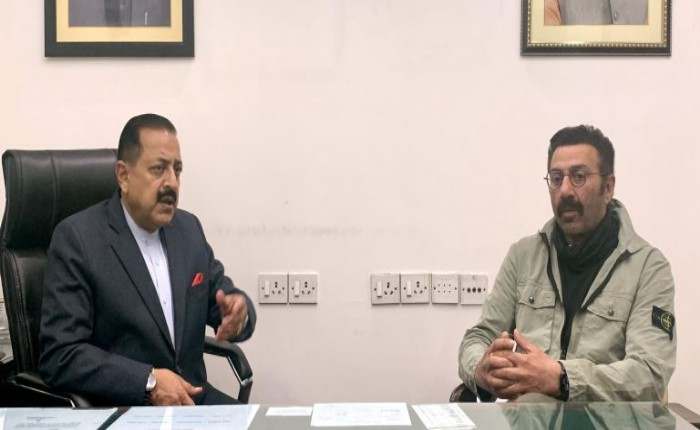 Noted Cine actor and Member of Parliament from Gurdaspur, Sunny Deol called on Union Minister Dr Jitendra Singh and discussed with him the Shahpur Kandi Dam project located on the river Ravi which will benefit the border areas of districts Kathua and Pathankot respectively, which happen to be part of the adjacent Lok Sabha constituencies of Udhampur-Kathua-Doda represented by Dr Jitendra Singh and Gurdaspur represented by Sunny Deol.

Pertinent to mention that Shahpur Kandi Dam project had been stalled for the last over four decades and it was revived after the direct intervention of Prime Minister Narendra Modi who had also announced its launching during one of his visits to Jammu. The project, which has been declared as “National Project”, is scheduled to be completed in 2022 and will allow India to use the water from the river Ravi which was otherwise flowing into Pakistan, even though under the Indus-Water Treaty of 1960, the share of water from river Ravi was earmarked for India.

Soon after Dr. Jitendra Singh was elected as Member of Parliament from the region in 2014, he had started following up the project for its revival. Even though the project was planned many years ago, it could not be implemented due to lack of agreement between the State of Punjab and the then State of Jammu Kashmir. However, on the directions of Prime Minister Narendra Modi, a fresh draft of Agreement was prepared and the project was revived in 2018.

Dr. Jitendra Singh said, under the Indus Water Treaty of 1960, India has full right of water on three eastern rivers namely Ravi, Beas and Satluj, but due to the callous attitude of the earlier governments, India’s share of water was flowing into Pakistan. He said, once the project is complete, it will improve irrigation potential of farmers in the areas bordering Jammu & Kashmir and Punjab.
Sunny Deol offered to accompany Dr Jitendra Singh for a joint visit to the site of the project, the main construction of which is coming up at location which happens to be the part of the constituency represented by Deol.

During the meeting, Sunny Deol also discussed some of the issues of mutual concern for the adjoining districts of Kathua and Pathankot, which are part of the two respective Lok Sabha constituencies. He also discussed the restrictions imposed at the Jammu & Kashmir- Punjab border on account of guidelines issued in the wake of Bird Flu precautions. The two leaders offered to hold a joint meeting with administration to address issues impacting the two neighbouring districts.