Fairs and Festivals have been a part of Indian tradition since time immemorial. Fairs propagate the cultural heritage of a place. Jammu has rich culture and varied heritage. From time to time, fairs are organized to acquaint us with the fragrance of our soil, our roots. One such biggest congregation of North India is the annual Jhiri fair.

The Jhiri Fair — a seven days affair,  is also known as “Farmer’s festival”. It is celebrated every year at Jhiri village on the auspicious occasion of Kartik Purnima (Full Moon Night).

Jhiri village is situated quite adjacent to Kalyanpur and Shamachak villages on Jammu Akhnoor road about 20 km from Jammu city. It is held to commemorate the martyrdom of Bawa Jitto, a farmer who gave up his life in protest against the oppressive demands of the zamindar (feudal lord) about 550 years ago. Bawa Jitto’s sacrifice is a testimony to the Dogra character of making supreme sacrifice of life not only as warriors but also to uphold cherished values. 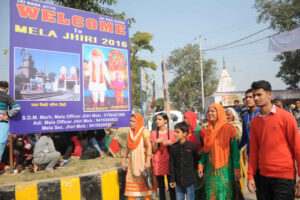 The tale of Bawa Jitto and Bua Kaudi is sung even today as Dogra folklore. Singers continue to sing ballads and rhythmic hymns in praise of Bawa Jitto. Bawa Jitto was a revolutionary farmer of Agar village near Katra (Reasi district), who sacrificed his life, while restricting Mehta Veer Singh from taking his crop produce share. Bawa Jitto was born in a Brahman family. He was a great devotee of Mata Vaishno Devi. It is believed that he had the vision of the Goddess Vaishno Devi. But unluckily his wife had expired at an early age.

Owing to continuous drought occurrence in the area, the cultivation of crops became impossible for him and as such he left his native place. He then came to village Shamachak which was then a barren land. Bawa Jitto met the owner of the land, Mehta Veer Singh and urged him to provide him with a piece of land for cultivation. Mehta signed an agreement with him and gave him a piece of land for cultivation. According to the agreement, Bawa Jitto was supposed to give one fourth of his crop’s produce to Mehta Veer Singh. Bawa Jitto worked hard and as a result of his efforts, he got a very good yield.

When the time to divide the share came, the owner asked to lift three-fourth of the produce, leaving just a quarter for Bawa Jitto. Bawa Jitto told him to follow the terms of the agreement. However, his request was turned down by Mehta Veer Singh who was an influential man and when Bawa Jitto found none to help him to get his due share, he collected whole of the produce and stood up on it. Accusing Mehta of doing injustice, he proclaimed that under no circumstances he would permit anybody to take the produce forcibly. He uttered his last words “sukki kanak nai khayaan mehtya, dinna ratt ralayi” meaning don’t eat raw wheat, oh Mehta, let me mix my blood in it”. He stabbed himself, leaving all grains drenched red with his blood. When his daughter, Bua Kaudi came to know about this, she burnt herself along with her father. The duo ended their lives but didn’t let anybody harm their dignity and bow to injustice.

After their deaths, it is believed that there came a fierce storm and rains and all the produce was washed away. All those who consumed this produce came under Bawa Jitto’s debt. All those who ate the produce were afflicted with various ailments – untimely deaths, misfortunes and ‘Yatars’. It was realized that this all happened due to the wrath of the holy souls. Thus, to seek forgiveness it was decided that their future generations will pay annual homage to this shrine.

The members of local and outside communities who have faith in Bawa Jitto and who worship him as Kuldevta (family deity) come here and pay obeisance. 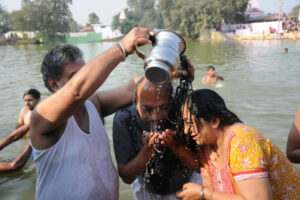 It is a ritual to take a dip in the holy Bawa da Talab which is known to have miraculous power of curing skin diseases.

Every year Natrang Jammu stages theatre shows on the sacrifice of Dogra folk legend ‘Bawa Jitto’ at ‘Jhiri Mela’. The event of Natrang is supported by the District Administration, Jammu and is a rarest opportunity for the audience to live through an old saga in memory of which this festival is held every year.

In addition to being a religious event, the mela also provides marketing outlet to the local sugarcane growers. As the area is famous for sugarcane crop, most of visitors in mela purchase sugarcane and take it along with them.

People from all over India come to Jammu during the time of Jhiri Mela to pay homage to Bawa Jitto and his holy soul. During the fair, exhibitions are organized that cater to diverse variety of articles ranging from pottery, vases, utensils and toys to books on Bawa Jitto. To make this Mela more attractive, stalls are installed by a large number of traders. The faces of the children lit up and they enjoy swings, slides, circus and other games. A number of temporary shops of sweets, toys and eatables are well decorated by the locals’ vis-à-vis outside vendors for the attraction of the general public visiting the fair site. Children are seen enjoying the courageous act of motor cyclist during bikes in the Death well (Maut ka Kuan).

Village Jhiri has acquired the status of a Teerath (pilgrimage centre). The fair lasts for almost seven days and is an exemplary experience for all its visitors. Jhiri Mela in Jammu also brings in a festive mood that is almost incomparable to any other festival of its kind. It rejuvenates the mood of the people and offers them some amount of rest and relaxation from the humdrum of daily lives.